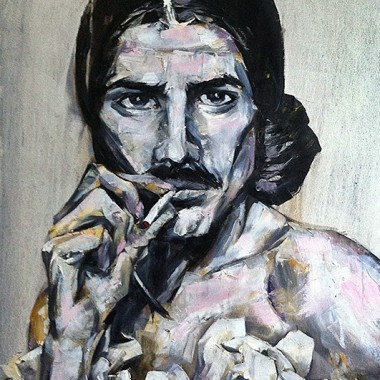 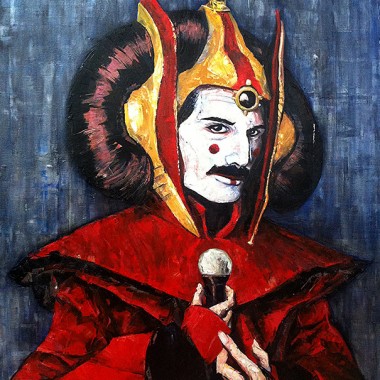 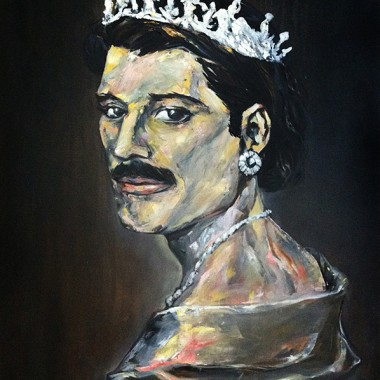 “I like the Carla Bruni one the most even though she wasn’t really a queen,” said Knigge, 31. “I have some affection for her. I like her music, and she’s beautiful.” Except, of course, his portrait features Bruni not as herself, but as Mercury, who, according to the artist, “had these really gigantic teeth.”

The artist says he first got the idea for the series last year while listening to “a lot of Queen.” The songs, which he’d heard countless times, suddenly “struck a chord with me,” he said. 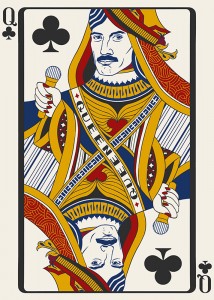 Freddie Mercury as Queen of Clubs.

Knigge began a common illustrating practice of “mashing two things that are kind of related, but not really”—in this case, Mercury and Queen Elizabeth I. But he found himself surprised by the finished piece; the whole, he realized, was greater than the sum of its parts.

“Slapped Freddie’s face on her, and it became something completely different, this strange mashup,” he said. “It became more than just a fun and absurd exercise.”

Knigge has since built the idea into an entire series, titled “Long Live the Queen!”, that includes 11 oil paintings and two mixed-media drawings. His aim: one part nostalgia, and one part head-turner.

“Queen embodies this weird juxtaposition of machismo and flamboyancy, especially Freddie,” he said. “I want people to recognize their idol, but I want them to see something totally different.”

As much as he enjoys Queen, the past months have felt, at times, like being inside a funhouse filled with the many faces of Mercury, says the artist.

“Now I can’t even remember my original feelings about it, because all I see now is Freddie Mercury as queens,” said Knigge. “He’s just kind of always listening. And it will be nice to sort of let him go and be in other people’s lives.”

Knigge’s works will be shown at St. John’s Eatery in Seattle starting June 28. The series will move to Tacoma’s Fulcrum Gallery on July 12.