Spot a pair of his shoes, and you might think it’s the latest fashion.

But the sneakers designed by Seattle artist Louie Gong dig deeper. Each of the some 200 colorful shoes painted by Gong comes with a unique story. 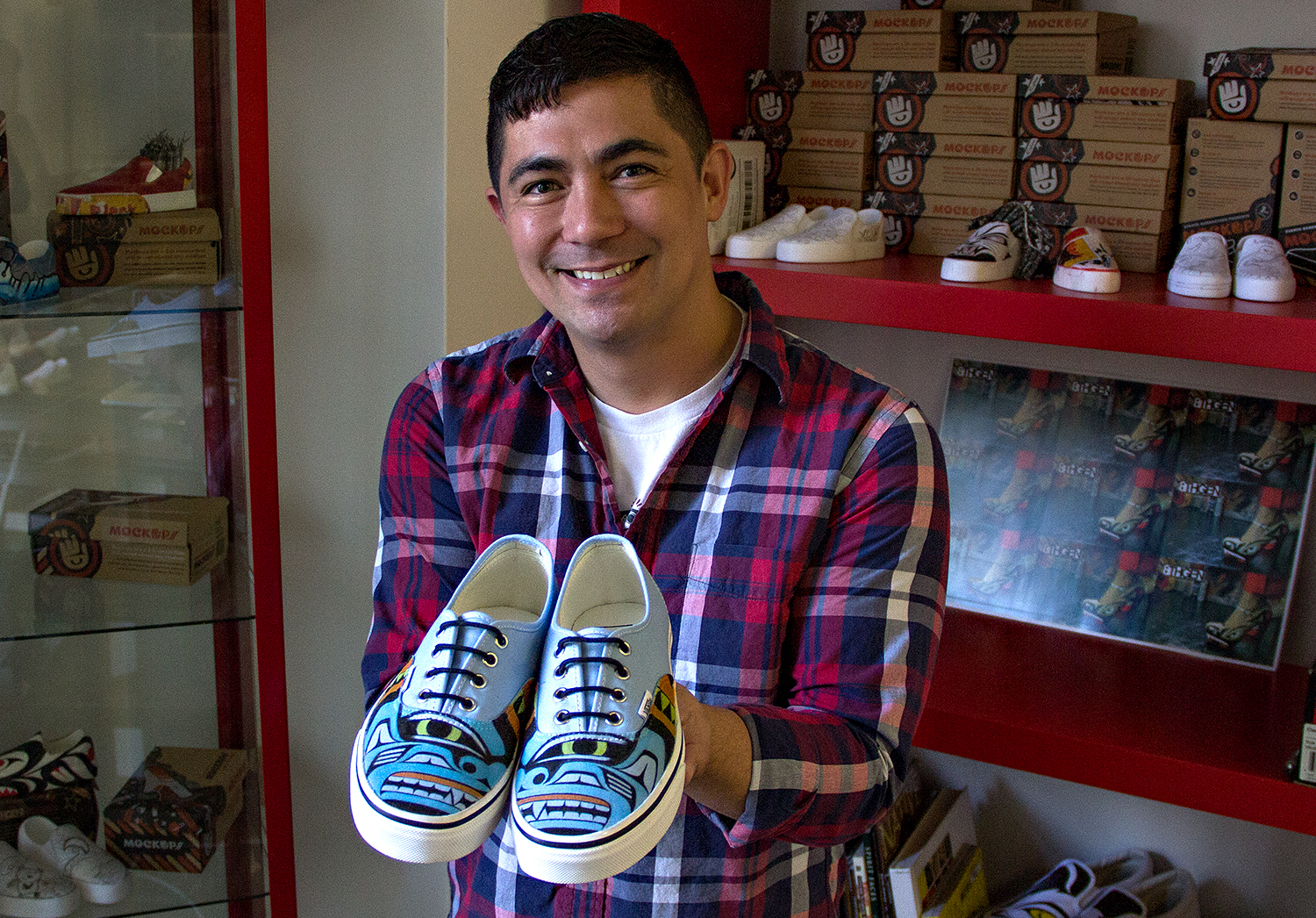 “My purpose … isn’t to just create something that’s aesthetically-pleasing,” said Gong. “The real art that I do is the creative ways I use my time to provoke messages and ideas related to the things I care about.” 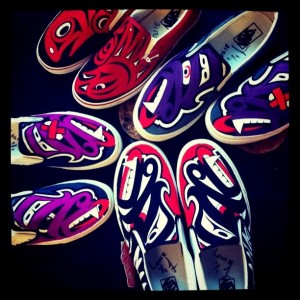 For 38-year-old Gong, the canvas shoes are a platform through which he can teach others about the mixed-race heritage. The artist himself is of French, Scottish, Chinese, Nooksack, and Suquamish descent. Growing up in rural Whatcom County and attending white-dominant schools, he had often felt misunderstood.

“Just by virtue of being my natural myself, I was throwing people off,” he said. “Over time, I started to internalize that, that maybe my mixed heritage represented something that was a little peculiar, or maybe it was a problem to be overcome.”

Gong himself found his sense of self during his college years at Western Washington University where he connected with other minority students. He went onto become an advocate and leader at the MAVIN Foundation, a Seattle-based nonprofit group that aims to educate the public about the mixed-race heritage.

When the election of Pres. Barack Obama triggered discussions about the mixed-race heritage, Gong realized much of the public had never before considered the topic.

While looking for ways to elevate the conversation, he stumbled upon shoe art. The medium allowed him to connect with his culture at a deeper level, and share with others at that same intimate level, too.

“It was kind of a spiritual awakening,” he said.

And he soon realized painting his message on shoes made it more approachable for some, especially kids who can’t yet verbalize their views on race. 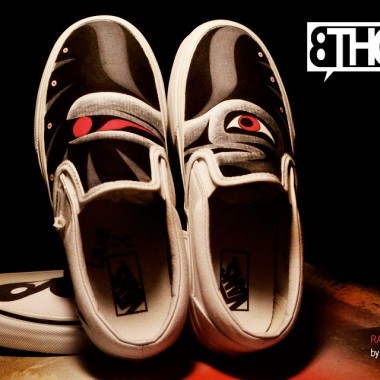 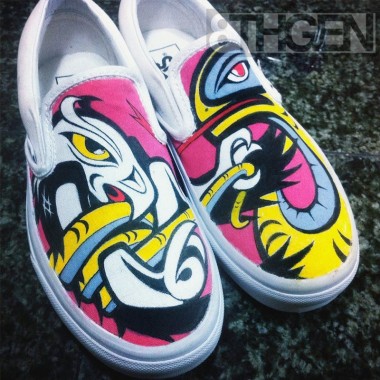 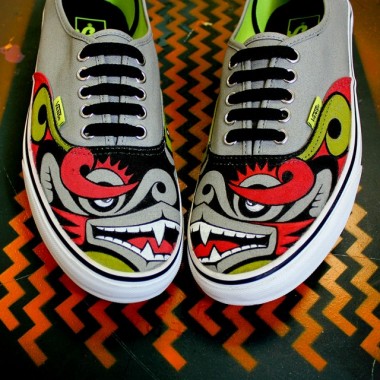 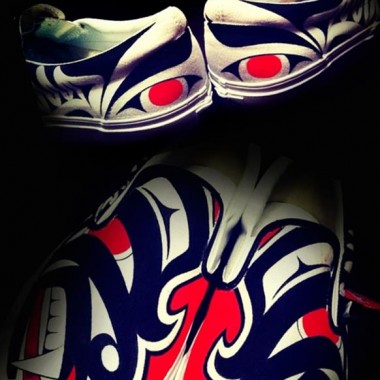 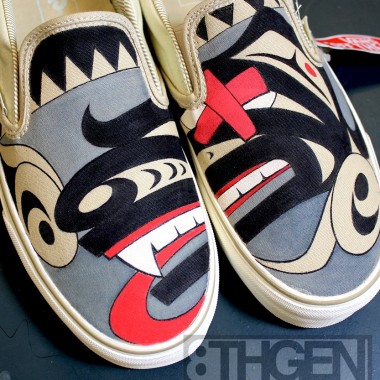 It all started with a pair of Vans shoes. Gong had wanted a pair as a kid, but his family couldn’t afford them. Gong grew up poor; his family lived in a house without running water in Ruskin, B.C. until he was 11. 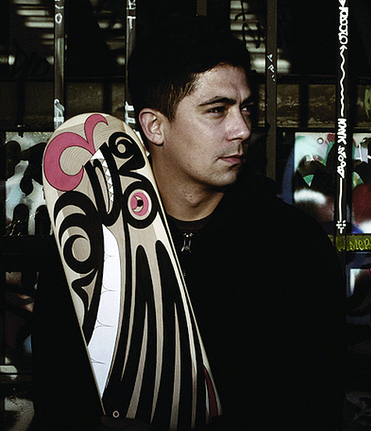 At 34, Gong remembered the yearning and decided to buy a pair. But he couldn’t find any that suited him.

“There was skulls, and checkerboard patterns, and all kinds of stuff, but none of them really reflected who I was,” he said.

So he took a plain gray pair home, and let them collect dust.

“I was lying down on my couch with just the light of the TV in the room, and I picked up the plain pair of shoes and I stuck them on my chest. And I grabbed a Sharpie from the stand behind me and started to personalize them,” he said.

What ended up on the shoes were what Gong calls “contemporary Northwest Salish art and some text.” He had just helped paint similar designs on hand drums at the Muckleshoot Tribe’s Intertribal Canoe Festival.

“Mostly crescents, ovals, and that kind of thing. They weren’t very good, at all,” said Gong of his shoes. “But when I wore them to work the next day, my co-workers saw them and were really excited, like, ‘Man, those are sick! Where d’you get those?’”

Gong designed a pair for his co-worker, who shared a photo on Facebook. Soon, he found himself taking orders for more shoes, first for $20 a pair, then, as interest grew, $90. Before he knew it, he had a two-year backlog on orders, and more than 50,000 fans on the Facebook page for his new brand, Eighth Generation.

“I never imagined I’d become a professional artist. So it’s just as big as a surprise to me as it is to everybody else,” said Gong, adding the only formal training he’s had is an art class he took in the eighth grade.

These days, Gong charges between $200 and $350 for his shoes. And he has honed his style to reflect his own unique background. Alongside the wolf and the eagle often featured in Gong’s work is the fu dog, the traditional Chinese guardian lion.

In April, Gong left his day job at the Muckleshoot Tribal College to devote himself fully to his art. But he still hold workshops for both adults and kids. After all, it’s not art for art’s sake that interests Gong; for him, art is an “accessible and utilitarian” platform for his messages. 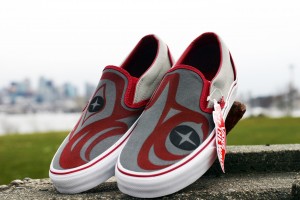 Shoes as a vehicle of change

The symbolism of shoes, says Gong, works well with his mission.

“They’re really powerful symbols for forward motion, what you want for the future. And also, empathy,” he said.

And each pair comes with a story. A red pair featuring eagle eyes, for instance, helps explain the idea of eagle vision.

“Eagles have two points of focus for each eye, with equal clarity,” said Gong, adding this feature allows the birds to see both ahead and back, for miles. Like eagles, says Gong, Native culture teaches one to think in generations.

“See the experiences you’re having in the context of generations. See the problems you’re having in line with the problems already overcome by your grandparents, their grandparents. Then you see the path to resolution,” he said. “Thinking of ourselves without this context makes us without rudders, and a lot more vulnerable to manipulation, I think.”

To help teach these lessons and to get kids talking about mixed-race issues, Gong created an art toy called MockUps. Kids are often better at expressing their views on race through art than by verbalizing, says Gong, and these shoe-shaped molds are more classroom-friendly than real shoes, especially among the indigent population. 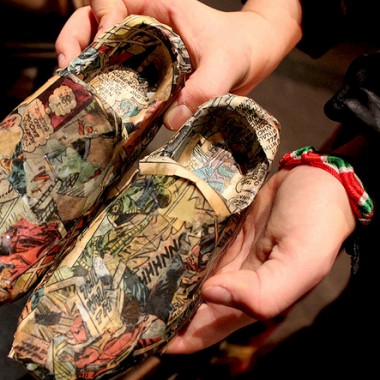 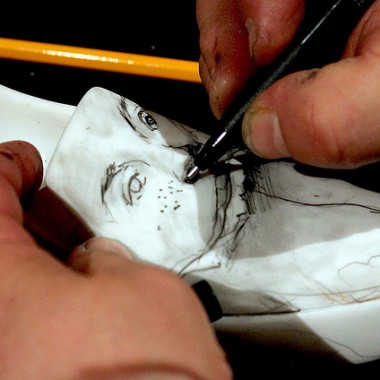 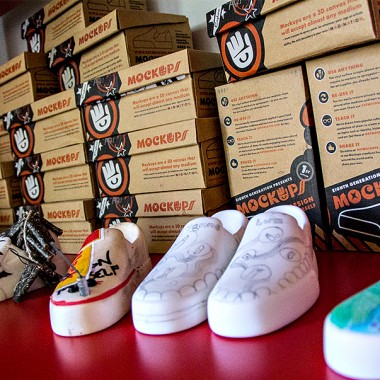 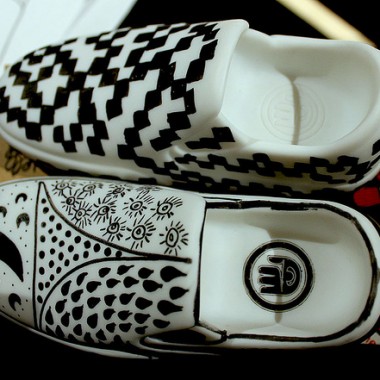 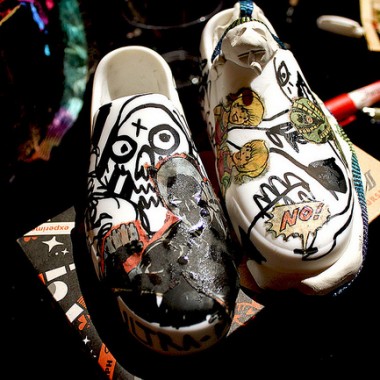 Gong sometimes uses oversized puzzle pieces, asking each child to contribute to the race conversation by decorating a piece, then later putting the pieces together to show the group’s diversity and collective identity.

Pushing forward, one art piece at a time 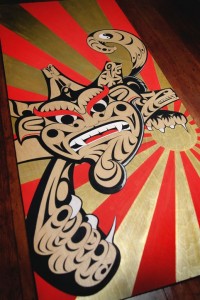 In addition to shoes, Gong also paints cedar skateboards. He has flirted with women’s heels, which were a big hit Gong chose to leave behind. Because they are labor-intensive, he would have to charge $500, maybe $600 for them, says Gong.

“My goal isn’t to sell my individual pieces of art for as much as I can. I would rather create a product that features my art that’s accessible to everybody,” he said.

So he’s focusing on $20 pieces like cellphone cases and housewares. The new line is set to debut on his website in a few weeks.

Gong is also collaborating with Paul Frank Industries, a teen fashion label recently criticized for throwing a Native American-themed party where attendees were photographed holding tomahawks and headdresses in insensitive poses. In the wake of the scandal, Frank reached out to four Native artists, including Gong, in hopes of collaborating, and Gong agreed. The result of their collaboration will debut in August.

For Gong, each artwork is a step forward, not just for himself, but for the discussion surrounding the mixed-race heritage.

“My friend, she said, ‘The lushest environment to live in is where any two ecosystems connect.’ Like the beach, for example. It’s where the most food is,” he said.

“That’s really my experience, as someone who’s always been between different communities and systems of communicating. I’ve started to be able to recognize the overlap. And sometimes that’s where new things can come out. And sometimes it’s where things that have always been there can be revealed.”

Note: This story’s background image is a hummingbird pattern created by Louie Gong for Eighth Generation.