Brad Hole was pedaling a sea kayak when he nabbed the biggest catch of his life—an 80-pound halibut.

“I’ve been told it’s the largest halibut ever caught on a kayak in the lower 48,” he said.

It was a clear day in May, the water “like glass,” says Hole. He had just ventured out some 3 miles from shore on Neah Bay.

“It was actually the first time I dropped the line in the water,” he said. “I got that fish.”

But before he could celebrate, he had to net the forceful fish that spanned 5 feet long. Hole was prepared with a homemade harpoon, a long wooden piece with a removable top.

“You have to harpoon these, or shoot’em, or something to get’em in. They’re so strong. They can take a chunk out of your leg, or their tails can break your leg,” he said.

Hole figured he had one shot to land the fish with the harpoon. So he planned his attack, then made his move.

“I just leaned over, and I hit it, and the water just exploded like somebody did a cannonball. And my line just—zzz!— went out to water, and my harpoon was floating on the water,” he said.

The fish raced away as Hole gave chase.

“I went way out a quarter mile and brought him up again, and brought the harpoon again,” he said. “And I got another shot at him, and this one got him.”

As the fish thrashed in the water, Hole, with the help of a nearby friend, pulled the fish on board and tied down its tail.

“But for an hour, the thing just slammed (its tail) on the back of the boat,” Hole said, clapping his hands in a metronomic beat to demonstrate. “My adrenaline was just rushing. “

Hole is still savoring his record-setting catch. In addition to bragging rights, he also has a freezer full of fish.

“There is not a lot of room for ice cream,” he said.

Hole, 42, has been fishing as long as he can remember. He has spent most of that time casting his line from a pier or from someone else’s boat.

Then three years ago, he found a new way to fish that no longer bound him to land or a boat.

“I call it a ‘ka-yacht,’ because it’s kind of a crossbreed between a boat and a kayak,” he said.

Hole’s kayak is wider and heavier than most, which makes it more stable in the water. And it’s more comfortable than others he has tried.

“The chair on this thing is like almost like a Herman Miller chair. It’s got lumbar support, and it’s got all these positions,” he said. 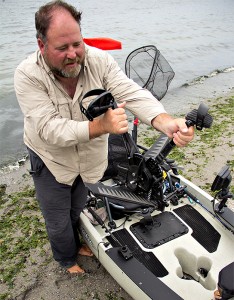 Unlike many kayaks, Hole’s Hobie kayak is propelled by pedal-powered underwater fins, and has a rudder for steering. The pedals free up Hole’s hands for his fishing pole. But there’s more to mind than just his line, says the angler.

“You have to multi-task. You’re paddling, you’re steering,” he said. “It involves more thinking. You’ve got the wind at you, you’ve got a line out, you’ve got to paddle, you’ve got to steer, you’re looking at the fishfinder. So that can be challenging.”

And as Hole learned with his prized halibut, bringing in a big catch can be tricky, too.

“You can imagine a king salmon on this. It’s almost like a sleigh ride. You hook one, and it can almost take you for a ride, and you’ve got to net it, too,” he said.

But once you get used to the routine, says the seasoned angler, it becomes as automatic as riding a bicycle.

Hole’s kayak and equipment cost nearly $5,000, but he describes his setup as “top-of-the-line”; beginners can get started with $800.

“I would say spend it on a kayak that suits you. A fishfinder, I think, is key,” he said. “Hopefully you’ll have your own fishing gear, and the rest of the stuff—you can kind of (get in) piecemeal.” 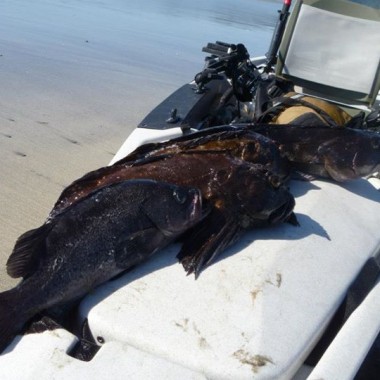 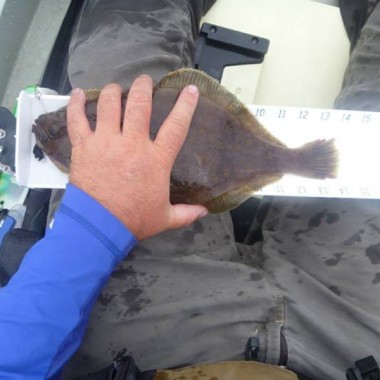 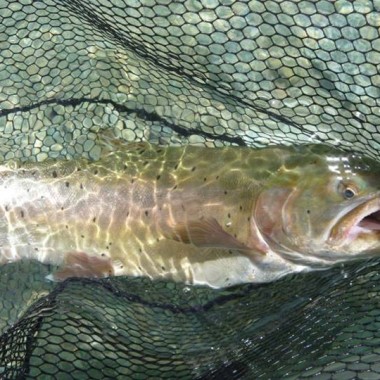 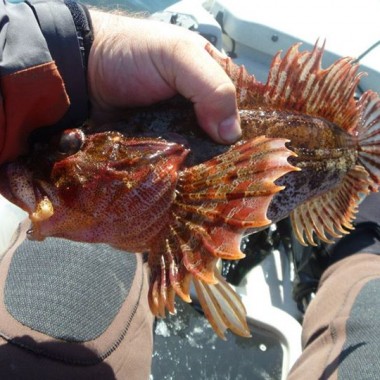 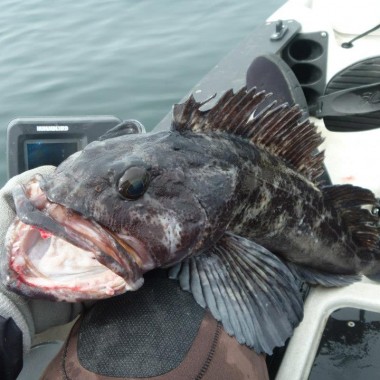 Teaching others how to fish

Hole is one of many anglers who have taken to kayaks in recent years. As a member of the Northwest Kayak Anglers, an online forum that covers five states, he has watched the community—and the interest—steadily grow. And on shore, he often enjoys brief spurts in the spotlight.

“My buddy and I, we’re always surprised by the number of people that come up to us and ask questions. We have a crowd around us, asking us all kinds of thing.” He said. “They’d never seen one of these before.”

As a convert himself, Hole understands the appeal. 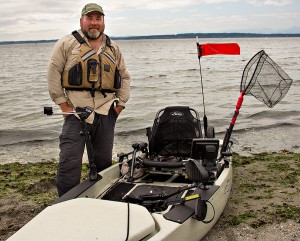 “It’s a lot cheaper than owning a boat. And you don’t have to pay for gas,” he said. “It’s a nice one-man craft, so you can take it out whenever you want.  You can get into tighter areas. You can get into shallower waters that power boats can’t get into.”

Hole is often asked how he turned an ordinary kayak into an envious fishing rig. His answer: countless hours of watching YouTube videos, and reading up on different equipment and options. Then came the many trials and errors that preceded his current setup.

“When you go out and buy a kayak like this … that’s the easy part,” he said. “Where do I put the rod holder? What are the best ones out there?”

Hole has since found the answers to the questions that once puzzled him. To help demystify the process for beginners, he and fellow angler Todd Switzer began planning a business around guided kayak fishing tours and kayak rentals. But the two have since learned the logistics like insurance costs and strict regulations for salmon fishing may prove prohibitive.

While they explore their options, the two plan to hold free clinics on Lake Washington come fall. And they’ll continue to answer questions online, in forums and on their Facebook page, Kayak Fishing Washington.

“We’ve spent thousands of hours out there, and feel we’ve really dialed it in as far as how to fish with these,” said Hole. “We thought this would be a good community-type meetup. Get people out in the water and more comfortable in a kayak, and provide a resource that neither of us had.

“We had to learn it the hard way. And we want to share some of our knowledge and spread the interest out there.”