When Sacha Blue photographs her subjects, they are submerged in water, holding their breaths. Yet most appear calm, poised, even at home.

“I have a background in teaching swim lessons, and I’m good at making people feel comfortable in the water,” said Blue.

Blue, 33, has taken portraits of hundreds of people—children, families, newlyweds, expectant mothers—since she started experimenting with underwater photography in 2009.

“When I started, there wasn’t a whole lot to learn from, so I just tried different things,” said the Kirkland photographer.

What began as belly shots of swimmers have since evolved into a more artistic approach with free-flowing subjects often shrouded in bright splashes of color. Little girls might sport frilly tutus. Women often don bold scarves and long dresses, sometimes even wedding gowns.

In addition to fabric, Blue’s works often feature surprising props. One of her favorites features a girl with her books. Another shows a boy with his guitar. A third stars a photographer, her camera, and loose rolls of film unraveling in the water.

“It’s the juxtaposition. You don’t expect to see somebody with a book underwater,” she said.

There’s also something about being submerged that adds another dimension, says Blue.

“It’s not necessarily that people look differently underwater, but it’s the perspective,” she said. 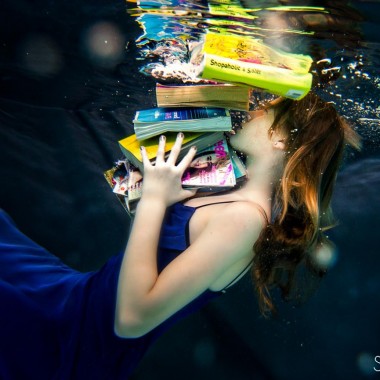 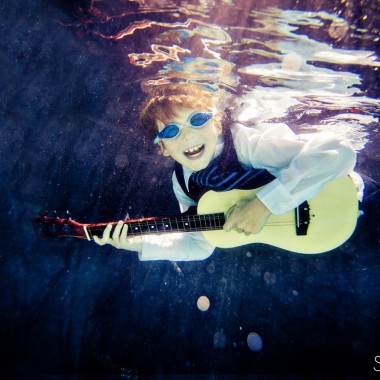 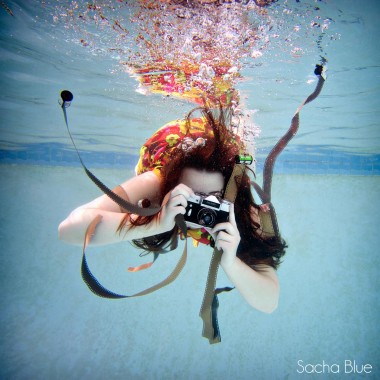 New perspective is the focus of Blue’s current project, which explores swimming not as a sport, but as an art. The key, she says, is to highlight the things people rarely see—the swimmer’s facial expressions, the movements below the surface.

“From the top, there’s always just whitewater,” said Blue. “When you’re underneath someone, shooting up, it’s different. In a pool, it can be really dramatic, especially with swimming. You see so much more movement, the muscles.”

But she wants her photos to convey more than just the action: “I want to transform their strength and grace, and power, and technique into works of art,” she said in her call for swimmers who’d like to take part.

Blue also wants to draw the attention of non-swimmers. She hopes the project helps them realize it’s never too late to learn.

“You don’t have to have a natural talent to succeed,” she said. “Put in the time and work hard, and it’s something you can be successful with throughout life regardless of speed or age, or height, or weight, or a myriad of things that limit you in other sports.” 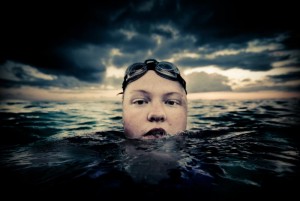 The photographer herself learned how to swim in her teenage years when she joined the swim team at Tacoma’s Stadium High School as a freshman.

“I couldn’t swim down and back without stopping, and I remember coach was basically like, ‘Well, how badly do you want this? If you want this, you can do it,’’’ she said.

Blue decided she wanted it badly enough to spend that summer learning how to swim with kids nearly half her age.

“I was 15 years old, and I was in a pool with 8-year-olds. But by the end of summer, I got a lot better. And then I spent most of high school underwater,” she said.

As she pushed her own limits underwater, Blue found footing on land. The “incredibly, incredibly shy” teen who couldn’t pick up the phone to order a pizza began gaining confidence.

“Most people that meet me now are like, ‘I don’t believe you,’ but it’s true!” she said. 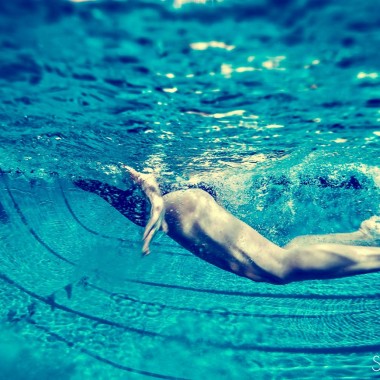 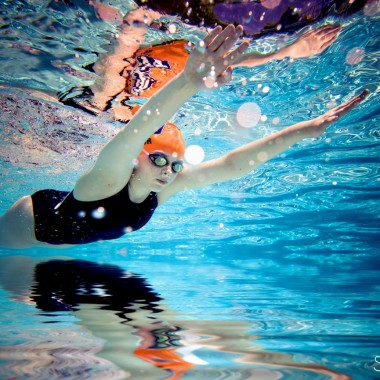 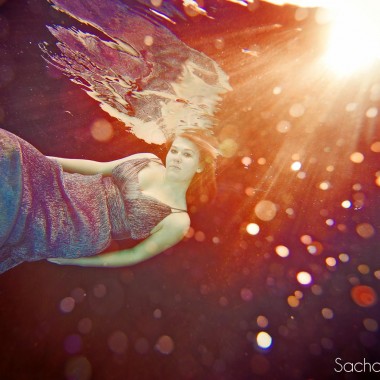 Like her teen self, some of Blue’s portrait subjects can’t swim. Many of them aren’t comfortable in the water, but are willing to take the plunge for the shot.

“They like the idea of it being so different that they’re willing to get past the fear,” she said.

Blue says she tries to make these non-swimmers feel relaxed so they not only look good in their photos but also warm up to the idea of swimming. And once they get over their initial fear, she says, many enjoy the introduction.

“People that don’t swim—they’re drawn to it. It’s this magical realm, because things work differently than on land. There’s this weightlessness,” she said.

In addition to her special project, Blue continues to experiment with portraits. She has ambitions of trying out even more elaborate props underwater.

“I bought a drum set at a garage sale last summer, and I want to find a drummer to take it underwater,” said Blue. “It’s like a mini drum set, and I think it’s for kids, but I really want to do it.”

Another dream of Blue’s: staging an underwater pillow fight.

“I’m picturing a photo of two little girls jumping on a bed, having a pillow fight with feathers floating all around,” she said.