When Erden Eruc told people about his plans, they’d often ask him if he’d read “Moby-Dick”, or whether he was afraid of sharks.

The Seattle man planned to circumnavigate the world by his own power—by rowboat, by bike, and by foot. In search of his own limit, the seasoned adventurer wasn’t afraid of much else.

“I had no doubt that I was ready for this,” said Eruc. “I knew my body, I knew my strengths.”

On July 10, 2007, Eruc pushed off the coast of California into Bodega Bay in his yellow ocean rowing boat. He had left behind his wife, his job in software development, and all the comforts of modern life.

The dream took seed a decade earlier, while Eruc was looking at a world map. He found himself tracing with his finger a route from Washington, D.C. to his home country of Turkey. Then he let his finger wander on until it had traveled the world.

“I wondered, ‘What if I could do that by human power?’” said Eruc. 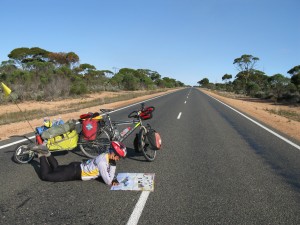 So the mountaineer and marathoner came to find himself attempting what no one else had done.

Eruc’s plan took him across three continents on his bike and feet. In between long hours of pedaling and hiking, he immersed in new cultures, experienced the kindness of strangers, and forged new friendships.

“Everywhere I went, whether in the heart of Africa, on the roads of Australia, in the remote coastal villages of Papau New Guinea, in port towns of Madagascar, Mozambique, Namibia, Venezuela or Louisiana, I encountered kindness,” said Eruc. “Arriving by a yellow rowboat, or telling them that I was about to take on an ocean created a great deal of goodwill. A loaded bicycle towing a trailer was a conversation piece regardless of location. Everyone knew I had a story to tell.”

Eruc’s trek across Australia was peppered with visits to classrooms where he shared stories of his journey with local students.

“I’d just tell my story for a half an hour, then carry on. And they (school officials) would call the next town, and tell the school that I was on my way,” said Eruc. “It was this journey that pooled these people around me. It was magical. The journey provided.” 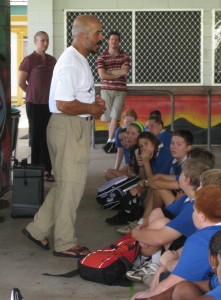 The classroom visits were precisely what he’d hoped to achieve through Around-n-Over, a nonprofit group he set up before beginning his journey in hopes of inspiring and educating children with stories of his travels.

“I didn’t want this to be a chest-beating exercise; I wanted this journey to be shared. I wanted to be the eyes and ears of children, and that really has been the drive since the beginning of this,” said Eruc.

Crossing the three oceans proved much more formidable. Eruc spent 780 days alone on the water, 312 of them in one record-setting stretch.

Pulling and pushing again and again, rowing stroke after stroke along a seemingly infinite span of blue, solitude warped into loneliness, inviting staggering compulsions of doubt.

“I had to suppress the odd thoughts, the negative thoughts, and focus on the positive,” said Eruc. “It’s a challenge to keep the mind focused sometimes, and I had tricks. I did multiplication tables, things like that.”

Self-control became a constant drill for Eruc, who adhered to strict daily goals and a rewards-based routine to keep his mind on track.

“If I wanted chocolate or an energy bar, I said, ‘Well, you have to row another two hours to earn it.’ I had a few cans of fruit. I decided to spread that out, have it every other couple weeks or so,” he said. “It was a game I had to play to tame the child within, one that wants everything right then and there.”

Sometimes when a bird flew by, he thought of his friend Goran Kropp, a Swedish adventurer Eruc considered a kindred
spirit. Kropp, among other feats, had ridden his bike from Stockholm to Mount Everest, then scaled the peak with no extra oxygen before biking back to Stockholm. 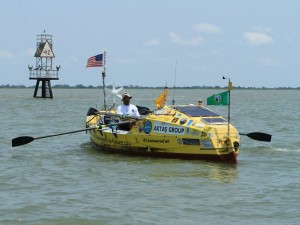 “When I shared my dream with him, his first question to me was, ‘When are you starting?’” said Eruc. “(He was) someone who understood what it meant to take on such a journey. In that way, I think Goran was special.”

Eruc had only known Kropp a short time when the two headed out for their first joint climb at Frenchman Coulee in Vantage. It was a beautiful fall day in 2002, and they planned to wrap up the day with a 90-foot climb on a route called Air Guitar.

Then, in a blink, Eruc saw Kropp falling.

“I saw him falling down. I ducked in the corner, and I held on to the end of the rope. But his protection failed,” said Eruc. “He hit the ledge where I was, and then I could see him falling down to the trail. And there was nothing I could do.

“He left as quickly as he arrived in my life.”

After witnessing Kropp’s death, Eruc decided there was no more time to waste; he must attempt to circle the globe in honor of his friend. He shared his decision with his wife, who told him, “You must.” 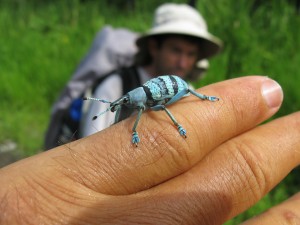 Eruc felt Kropp’s presence most strongly whenever he saw a bird. Kropp’s mother had told him about a promise she and her son made when he was a young boy. She had promised that if she should die, she’d come back for him as a bird. He had promised to do the same.

“The sight of a majestic bird or odd creatures of this world puts a smile on my face, more readily so now than before the accident,” said Eruc.

As he rowed across the oceans, thinking of these moments, Eruc knew he must push onward, for himself and for his friend.

“One gets that sense throughout this journey—that I’ve survived this, that I can continue, that I can deliver what it requires. It is demanding, but I am tough,” said Eruc.

But like confidence, self-doubt also came in waves. By the time Eruc reached Africa, he was awash in uncertainty.

Media interest in his project had proven meager, as had the donations to his nonprofit group. As a result, his stories had not reached nearly as many children as he’d hoped. 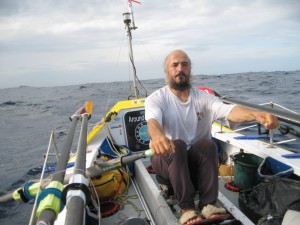 “By the time I reached Africa, we had over $200,000 in budget deficit. We were questioning the sanity of it all, and my wife was starting to question. She was saying, ‘You should come home. If you don’t have a higher purpose, why are you continuing?’

“I felt alone. I felt exposed. All of these ideas I had around this journey were not coming through, and I felt, ‘OK, now my wife is also questioning what I’m doing. What am I doing?’” said Eruc.

Eruc came close to giving up. He was no longer sure whether he was making a difference, what it was he was after.

But he pushed on, because he knew he must, for both himself and for his friend.

“I focused on the job at hand, and really kept my head down,” he said.

Five years, 11 days, and 41,193 miles after he began, Eruc finished what he set out to do, becoming the first person in history to circumnavigate the globe by his own power and the first rower to cross three oceans.

Erden Eruc and his wife, Nancy Board
(Credit: Erden Eruc)

By the time he returned home, he had raised $100,000 for Around-N-Over. But the trip had also cost him and his wife $240,000 of their own money, including their Seattle home with a view.

Still, Eruc, now 52, is not ready to leave his experience behind as just his own and return to life as he knew it.

“I realized just how little I need to exist. The experience of being at sea alone is really an experience to shed some weight—dead weight, if you will—from my existence and sort things again,” he said.

He has teamed up with Seattle film director Dannul Dailey, and the two have launched a Kickstarter campaign to fund a documentary about the trip, titled “Castaway with Purpose.” He also has plans to write two books, one for children.

Eruc and his wife, who do not have kids of their own, see this project as their legacy, their way of investing in the future and inspiring children to dream big.

“One cannot discover oneself if we don’t take on such a big journey. If we deny ourselves our dreams, if we deny ourselves the challenge, we will not grow to meet them. And that’s really the big realization (I had) throughout this journey,” said Eruc. “Each individual needs to realize they have a lot to deliver, a lot to give to this world. And we owe it to ourselves to meet that challenge.”