Strap into a flyboard, and you can fly through the air with the greatest of ease, says AV Water Sports.

An aquatic cousin of the jetpack, the French-made flyboard propels the rider by shooting out water from tubes underneath their feet. A long fire hose connects the board to a jet ski, which powers the board and sends the rider soaring.

“It’s a combination of the hoverboard in ‘Back to the Future’ and that thing that Green Goblin in ‘Spiderman’ rode,” said Mike Jeffery of Kirkland-based AV Water Sports, which began offering flyboard rides in March.

Here’s how it works.

The rider straps into the boots of the flyboard and jumps into the water. Once the rider reaches sufficient depth, the jet ski driver punches the throttle, powering the rider from the feet up and letting out what sounds like a muffled roar of a jet ski.

The trick, says Collier, is to emerge from the water in a firm “Iron Man” stance.

Once out of the water, balancing is much easier, says Collier, and the rider can control his or her direction, much like on a snowboard. 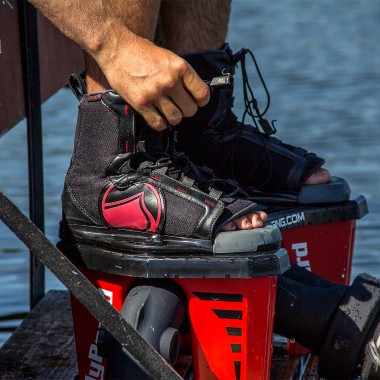 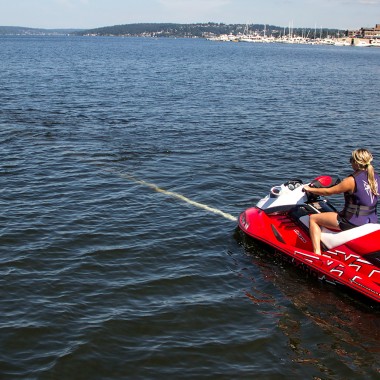 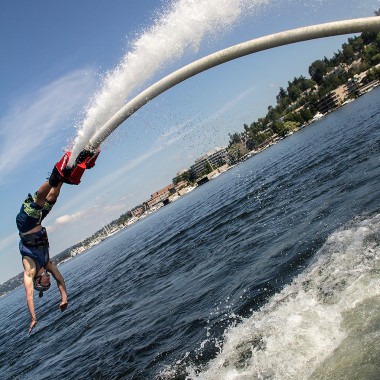 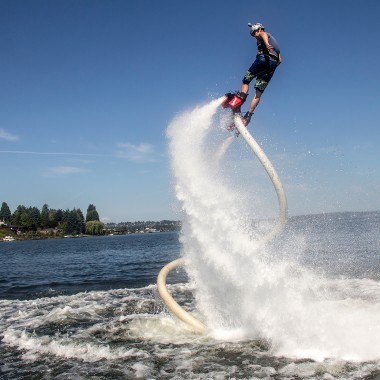 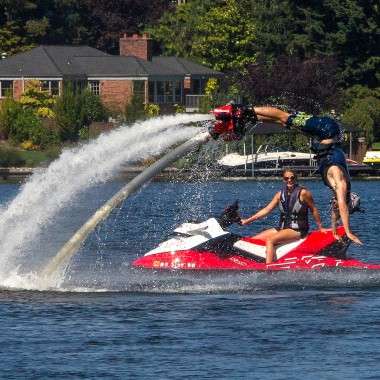 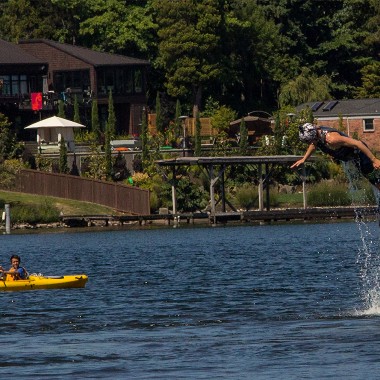 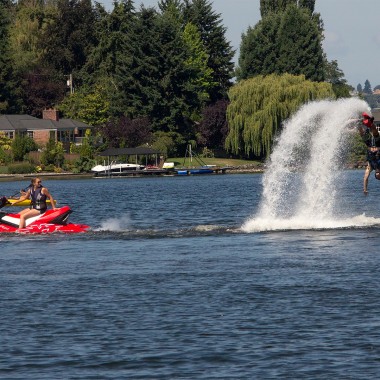 “The person on the board controls left, right, forward, backward, and, to an extent, how high they go,” Collier said. “Their feet and the angle of their board control the water pressure. But most of the upward and the downward (power) is from the person on the jet ski, and how much throttle they’re giving it.”

And, Jeffery adds, the flyboard gives the rider more freedom than other water sports.

“Compared to wakeboarding or water skiing, you don’t have to wait for the boat to come back around; you can just keep trying every time. So you learn a lot faster,” he said.

People as young as 9 and as old as 60-something have ridden the flyboard, according to AV Water Sports, which operates in Lake Washington, Lake Chelan, and the Spokane area.

“People think they have to be experts from the get-go, but really, it’s for anybody. You don’t have to be athletic,” said Collier.

“I’m going to have both of my parents do it,” added Jeffery.

The flyboard can carry up to 375 pounds. AV Water Sports will offer rides until the end of September.