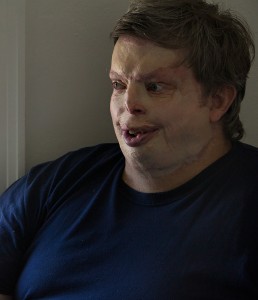 Children openly stare. Store clerks ask him to leave. People call him names within earshot, as if he can’t hear.

These things no longer shock Matt Barrett; they’ve become part of life as he knows it.

“I was in the theater … and the next thing I know, I’m getting a purse swung at me. I’d scared her kid,” he said.

Heavily disfigured, Barrett is often mistaken for a burn victim. But his scars are the result of 11 types of cancer, four brain tumors, and more than 5,000 procedures, 1,710 of them major.

At 6 foot 4 and more than 300 pounds, Barrett, 48, is a towering figure who commands attention. And because his rigid legs move slowly, gawkers have plenty of time to stare.

But try as they might to banish him, Barrett refuses to give up on the goodness of humanity. He is quick to smile and reach out to others. And he finds joy in the little things, like finding a bargain at the grocery store or receiving a thoughtful message from a friend.

“I did not choose this life and have not always wanted it, but I have learned to accept it and adapt to its trials, tribulations, and challenges,” he said. 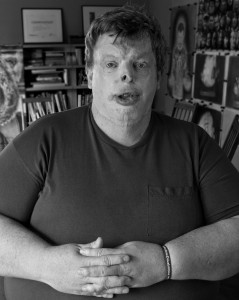 Barrett was just 2 and growing up in a Mormon household in Grand Junction, Colorado when he began showing signs of basal cell nevus syndrome. The genetic form of cancer affects the patient’s skin, nervous system, endocrine glands, and bones.

“There really is no good type of chemotherapy for this type of tumor,” said Charles Wilson, a retired physician who treated Barrett during his childhood. “The only thing that could be done is to remove the tumors as they occur, but of course with the number and the places they occur, it’s difficult.”

Barrett’s life has been one long cat-and-mouse game between his doctors and his ever-resilient cancer cells. His face is now a quilt of countless skin grafts. His eyelids have been replaced so many times that they no longer fully close when he sleeps.

“When I was 32, they decided to just take sections of my face,” said Barrett, “because the cancer was just [spreading]. They’d do something, and they’d have to redo it in six months.”

His father and brother suffered from the same genetic cancer, but Barrett was most severely—and visibly—affected. Still, his parents didn’t allow him to talk about his illness, afraid it would draw unwanted attention. As a result, Barrett suffered in silence, dealing alone with his pain and fears.

“I was never really close to any of them, the black sheep I was,” said Barrett of his family. “I grew up watching cancer change and destroy my life and my family, going to doctor after doctor for problem after problem, and all the while trying to hide it from those around me in school and public … Not exactly the best way to grow up.” 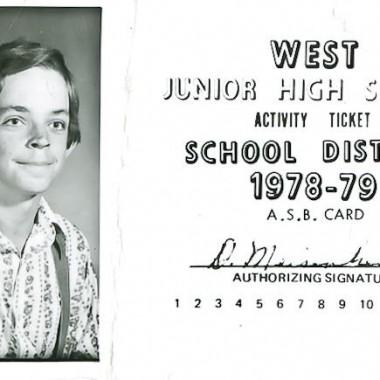 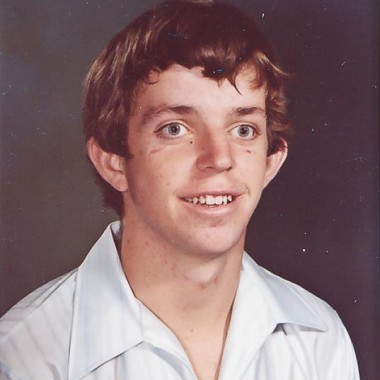 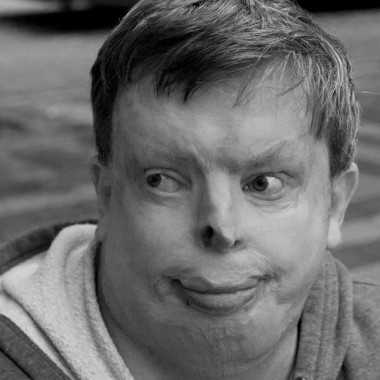 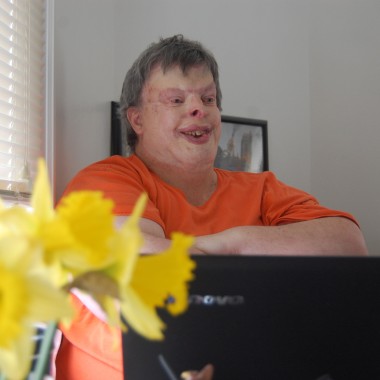 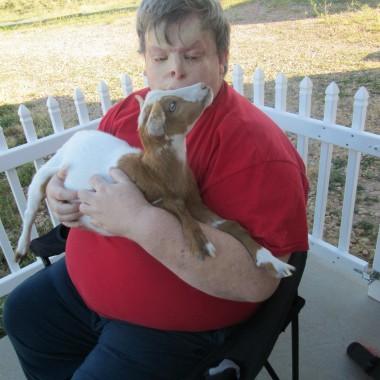 When Barrett was 17, his father tried to enlist him in the military. But the military didn’t want a cancer patient, so his father placed him in Job Corps. instead. It wasn’t long before the demands of cancer—the pain, the procedures, the recovery—took over his life. Unable to hold down a job, he became homeless and drifted from place to place, working at a circus for a time, then running with a motorcycle gang—a phase of his life he’s not proud to remember.

“My bad-boy phase—I can attribute to my anger and my hostility toward my family. And my church. And just life in general,” he said.

‘Let People See You for You’

Then Barrett met a chaplain who changed his life.

“The chaplain told me, ‘You know, you have a choice. You can start your life over and put away all this anger, all this hate. And change your life for the better. And let people see you for you,’’’ he said.

The chaplain’s words hit home. Barrett decided he wouldn’t let his anger define him any longer. He began living a very different life, residing at various homeless encampments before eventually moving into Seattle’s Tent City 3. He began writing poetry about homelessness, and published a book titled “A View from the Street,” which he sent to lawmakers around the country. He also started writing a blog, sharing stories about his lifelong battle with cancer in hopes of giving others strength.

“I just see myself as someone trying to live the best I can and leave a positive mark behind me in this world,” he said. “My wish is that people wouldn’t judge a book or person by their cover, [but] rather get to know the person inside.”

Two years ago, Barrett was approved to move into a studio apartment in a high-rise public housing building in downtown Seattle.

“My friends like to tease that I live in a penthouse,” he said.

But there is nothing spacious or fancy about the so-called penthouse, which costs him $469 per month—more than half of his monthly disability check of $710, most of which covers bills. Barrett also receives $175 per month in food stamps, but he must hunt for discounts and deals to make ends meet.

A Life of Loss Lived Well

Barrett’s life has been punctuated by the things he has lost to cancer—his childhood, his family, his senses of smell and taste.

“It’s having cysts in your jaws that take out your sinuses and your [senses of] smell and taste, having your jaw wired shut for three months, because your bone is down to an inch and they don’t want you to chew with it anymore,” he said. “The cysts are basically hydrochloric acid, you know. Whatever they get a hold of, they’ll eat through.” 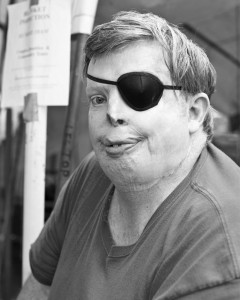 Through the thousands of procedures, Barrett has developed a tolerance for strong painkillers. Even doctors are amazed heavy doses of morphine can’t give Barrett any relief, but to him, it’s just part of life as he knows it.

“Because it’s all I’ve ever known,” he said. “I don’t even remember what it feels like to be pain-free.”

Perhaps because he has lost so much, Barrett doesn’t seem to take anything for granted. He doesn’t allow self-pity, and often checks on his friends at Tent City 3.

But these days, he spends most of his time in his apartment, reclined on his bed, trying to rest as sirens blare by and life goes on around him. Two brain tumors, one terminal, have been growing in his brain, and months have passed since doctors told him he only had months to live.

Since then, Barrett has been slowly losing control of his right leg, which spasms and numbs at will, causing him to fall. The pressure inside his head triggers debilitating headaches, and he now wears a patch over his left eye, which blurs in and out of focus.

“When I take the patch off, my right eye goes to black. [Then] I can’t see out of the right eye, and the left eye’s vision is diminished,” he said. “I just try to keep calm and don’t freak out.”

Ask Barrett how he’s doing, and he says he’s tired and hurting, but “trying my best.” He’s feeling more pain than even he is used to. He knows his body is breaking down. 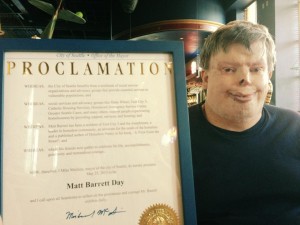 “My body has been compensating for the last 46 years for all the issues,” he said. “And now it can’t keep up. The damage in my head, the damage in my system is too great to compensate for everything.”

The grace and strength Barrett has shown over the years has not gone unnoticed. In May, dozens of his friends gathered to celebrate his life, and unveiled a surprise: Seattle Mayor Mike McGinn had declared May 25, 2013 “Matt Barrett Day” in honor of his “generosity, accomplishments, and tremendous courage.”

Barrett says he isn’t afraid of death; he’s only afraid he’ll suffer at length before his body can finally rest, free of pain.

“The reality is there’s only way for this pain to end, and that’s not something anybody wants to talk about,” he said.

“I’ve had a full life. I’ve done things. There are things in my life that I wish I would’ve done that I didn’t. But there are also things that I did that most people only dream of.”

For those who’ve asked how to reach or help Matt Barrett: you can reach him via mail at 1902 Second Ave. #1202 Seattle, WA 98101, or via email at aviewfromthestreet@hotmail.com. He does not have a full-size fridge, so he can’t store a lot of groceries at once. But he does appreciate gift cards for Safeway, Amazon, and movie theaters—things that can help fill in the gaps and add a little joy to his days.

In 2011, Matt Barrett was invited to speak at a banquet hosted by the Invisible Disabilities Association. Watch: