What kind of a home does a homeless person dream of? Marissa Cool recently asked Tent City 3 residents to draw out their answers and made a surprising discovery. 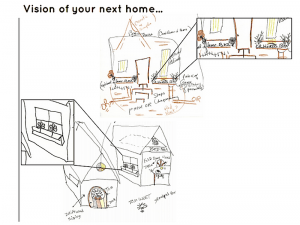 The sketched homes were rather basic, but many of them shared a common feature: “These little sketches, each one of them, had an herb box, a little flower box. And I was taken away by that. What does that mean?” Cool said.

Cool has since learned the flower box holds seeds of yearning—for a way to decompress, for a way to connect meaningfully with nature, for a life alongside neighbors who don’t avert their eyes.

Cool is one of ten students enrolled in a one-of-a-kind architecture class at Washington State University. Called Welcoming Individuals with Transitional Homes, or WITH, the graduate-level course centers around designing transitional homes, a makeshift mother-in-law type of structure, to be built in the backyards of two Seattle-area homes.

The plan is to eventually build the structures in partnership with the community group Homeless in Seattle and allow the homeowners to rent them out to people in transition. But the project isn’t just about the few who’ll gain housing as a result.

To learn the needs of their client base, the entire class spent two days and one night at Seattle’s Tent City 3 in September.

“I didn’t know what to expect,” said Taiji Miyasaka, who teaches the class.

Miyasaka and his students listened to the residents’ stories about how they’d come to be homeless, what it’s like to live outside, how hard it is to gain footing while living in a tent. 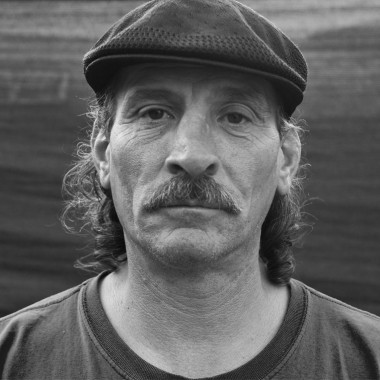 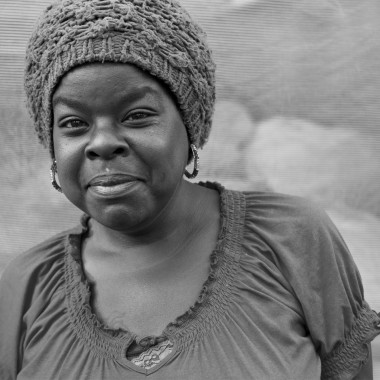 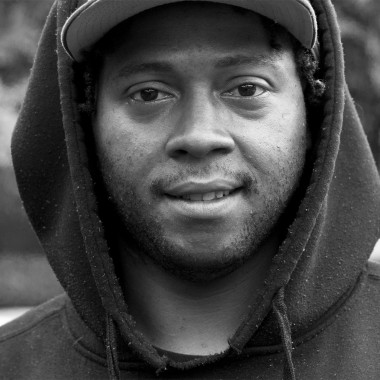 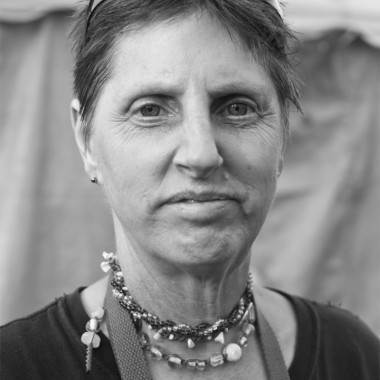 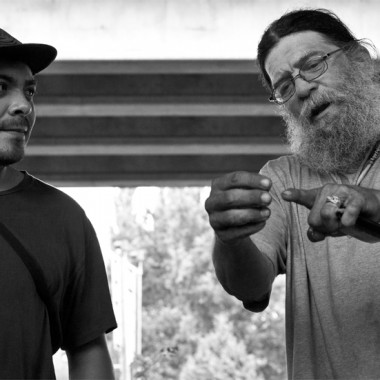 “It’s hard to get a job, can’t go to school, because people will look at you like you’re an animal,” Curtis Berry, a homeless man, told the class. “And you know when you go apply for a job, they’re going to say, ‘Where do you live?’ Well, I live in the bushes out here.”

“It gave me the sense that it could happen to anybody. You could be one of them,” he said. “There was a guy who was making $90,000 a year and had a family of two kids and his wife, and his dad. And once his dad passed away, he couldn’t handle his death and just left. How could that happen? I just, you know, that’s life-changing to me, that someone’s death can lead you to this place.”

“Think of the stresses, the social pressures, the mental strains that people without homes undergo every day,” he said.

“Just how you bathe and how you keep yourself clean,” said Cool, “all those things are really a chore to do when you don’t have a home.” 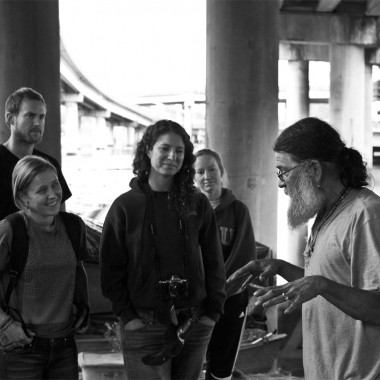 The students gathered around ThreeStars, who lives outside. (Credit: Rex Hohlbein) 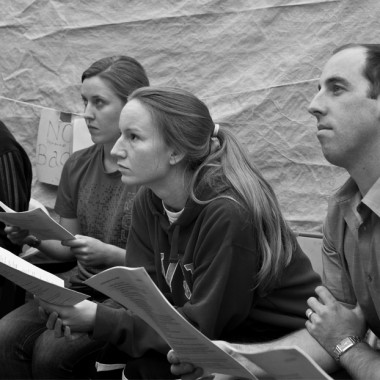 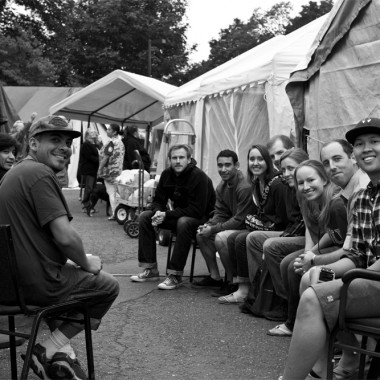 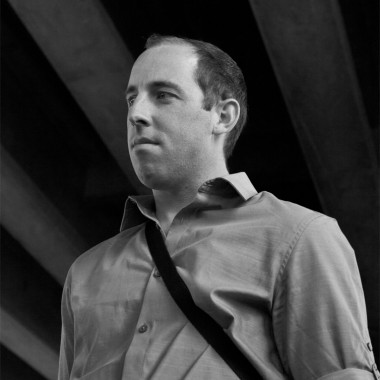 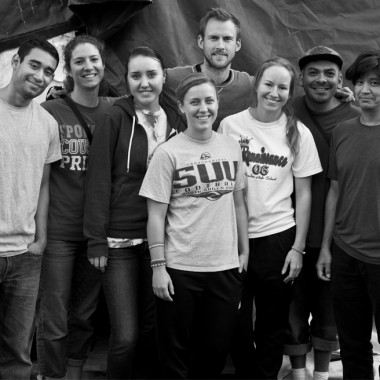 ‘The tenant no longer fades into the background’

The students turned the lessons learned into design ideas that incorporate the tent city residents’ needs and wants, including all the things a flower box signifies.

“Our approach to this project is to create a space that helps alleviate those weights and create an inflection of emotions where they’re uplifted and strengthened by their physical surrounding,” said Thomson.

Thomson and Cool, his project partner, designed a light-filled structure to help ease the transition to a life indoors. 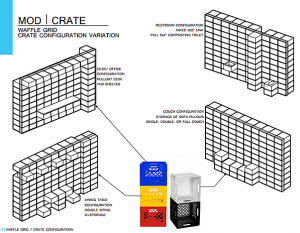 Student Arnold Altuna saw that milk crates are ubiquitous to the tent city life and decided to use them as the building blocks for his modular structure. His design involves lining the walls with crates, which could be pulled in and out and used as a desk, storage, or even an outdoor garden wall.

Steve Schmitz, another student, designed his shelter using pallets. The “often left-over” material can be reinforced and repurposed to serve as the frame of a light and airy structure, he said.

Whatever the material, each design focused on “relationship points”—shared spaces like a garden, a patio, or a chicken coop where the homeowner and the tenant can interact and connect.

“So many of these people who have been living outside have had no privacy, but they feel that breakdown; they feel that invisible wall,” said student Steve Schmitz. “People don’t look at you if you’ve been on the street. People don’t talk to you. It’s almost as if there’s a glass wall between you and the person walking by.” 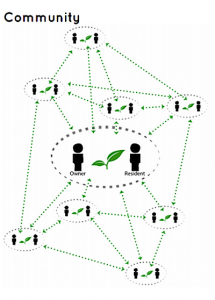 The hope is that over time, the tenant will also form relationships with surrounding neighbors and become a part of the community.

“The tenant no longer fades into the background,” said Gomez, describing the project’s goal to create “micro-communities of seven or so houses relinquishing that idea of invisibility.”

“You’re not just putting them in the backyard; you’re making this person a part of this community,” said Thomson.

The issue of homelessness must be approached emotionally, not intellectually, said Hohlbein. Asked whether one would be willing to host a transitional tenant, “it’d be hard not to say, ‘You know, I don’t really want to do that,'” he said.

“But I think what happens—I know it happened to me, and I know it happened to all the students, I know Taiji’s talked about how it happened for him—is that if you have that [personal] experience, it begins to change that,” Hohlbein said. “If you have something to connect it to, then you say, ‘I guess I can see that, you know. Freddie, or whoever you met, I really liked him, and I can see him sharing this with me.’”

“If you don’t experience it, it’s very hard to learn,” said Miyasaka. “It’s not a problem-solving project; it’s a process.”

‘It’s changing us, how we respond to people’

Hohlbein, who has volunteered his own backyard as one of the two building sites, hopes a few of Miyasaka’s students will see the project through completion as part of their thesis work. And Miyasaka may teach a similar class that takes the chosen designs and sees them through the building phase.

The students, too, want to see their designs become reality. After all, they themselves now see homelessness differently. The class has decided to call tent city residents “people without homes” instead of “homeless people” to emphasize that they’re people first, home or no home. And that’s just one message they hope to spread.

“It’s changing us, how we respond to people,” said Thomson. “We have big egos in architecture. We want to create these big, amazing things, but that’s not what it’s about. It’s about the people. It’s about responding to their needs in simple and beautiful ways.”

Taiji Miyasaka’s students will share their designs with the public this Friday, Nov. 22 from 5 p.m. to 7 p.m. at the offices of Miller Hull Partnership located at 71 Columbia in Seattle.