When SunRay Kelley starts building a home, he doesn’t always know how it will end up looking. But his trademark style has a few recurring traits: tree stump foundations, soft curves in place of sharp corners and, adorning the exterior, accents of swirling curlicues.

A walk around his nine-acre homestead in Sedro-Woolley feels like a journey to the land of make-believe. Eight Kelley-built homes sit sprawled on the land his grandparents homesteaded in 1920.

SunRay Kelly and his wife live in the Garden House. (Martha Kang/KPLU)

The Stump House sits next to a trout pond. (Martha Kang/KPLU) 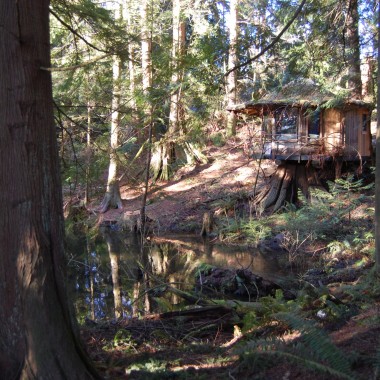 This alternate view of the Stump House shows the tree stump on which the house sits. (Martha Kang/KPLU) 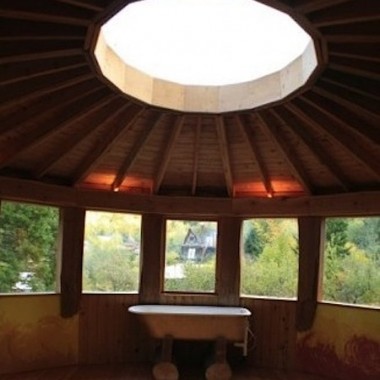 The Waterfall House has a skylight at the center of its round roof. (Courtesy of Camille Nordgren) 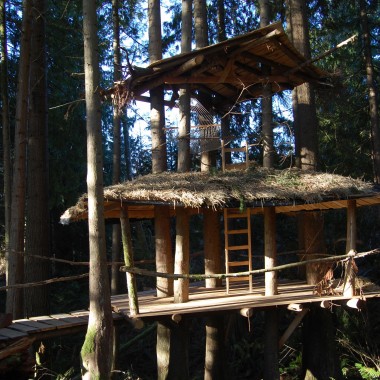 This treehouse sits above a stream. (Martha Kang/KPLU) 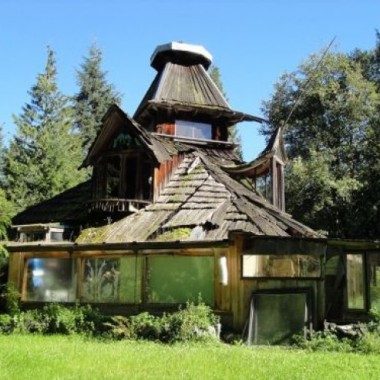 This image shows an alternate view of the Sky House. (Courtesy of Camile Nordgren)

Life on the homestead

Kelley, 62, grew up on the lush land, in a traditional-style house. After reaching adulthood, he began transforming the place into a wonderland in the woods, complete with streams and trout ponds, a wood-fired sauna and even a suspension bridge in the works. He and his wife live on the land with their tenants, practicing what they call a “chop wood and grow your own vegetable lifestyle.”

“I got a mission here, and that’s to regrow the Garden of Eden to its fullness,” said Kelley. 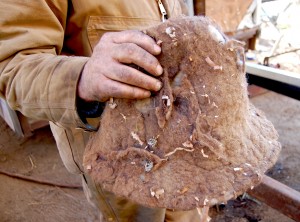 The couple grows some two dozen types of fruits and vegetables. All the water used at the homestead comes from the mountain above. The homes have a generous number of windows to soak up the sun’s rays, the namesake of the heliotropic man originally named Ray. (He likes to joke it was his parents’ usual introduction — “This is our son, Ray” — that prompted him to change his name to SunRay.)

Kelley is a man of the land from head to toe. During the warmer months, he likes to wander around barefoot, his soles toughened, “because that also connects me to the earth.”

And he dons a felt hat. Made from the wool of a former four-legged tenant, it has softened from years of wear.

“One of my renters got the sheep and talked me into letting her have it. And it ate my garden, and I was a little disgruntled, you know. And she felt bad, so she made me a hat out of the sheep’s wool to compensate for it eating my garden,” Kelley said.

Kelley has never been one for straight lines. He’s preferred generous, embracing curves since his college days at Western Washington University.

“They give you a T-square and a triangle, and tell you to go draw plans. But they also give you what they call the French curve, you know, which is just [a tool for] gorgeous curves. So [I thought,] ‘forget the straight lines and go crazy with the French curve,’” he said.

Kelley’s experiments with the French curve inspired his first creation, the Earth House, which he built while still in college. Since then, he’s built homes of circular designs along the West Coast, as well as in New Mexico, Colorado and Costa Rica. His proudest achievement to date is the Harbin Hot Springs Temple in northern California. This year, he’s working on a project in Vermont. 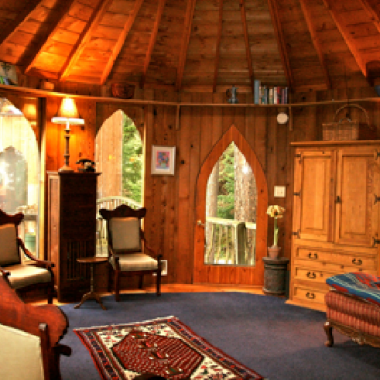 The Hobbit House is located on Orcas Island. (Courtesy of SunRay Kelley) 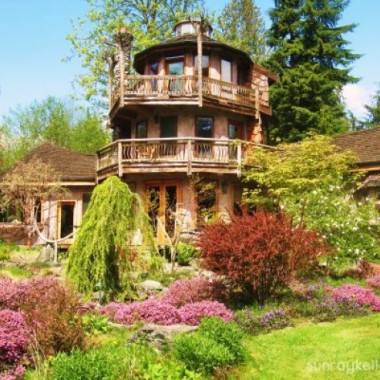 The Buddha House is in Bow, Washington. (Courtesy of SunRay Kelley) 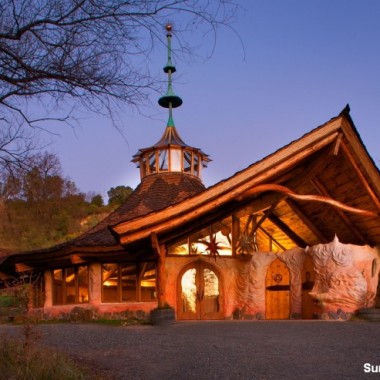 The Harbin Hot Springs Temple is the builder’s favorite. (Courtesy of SunRay Kelley) 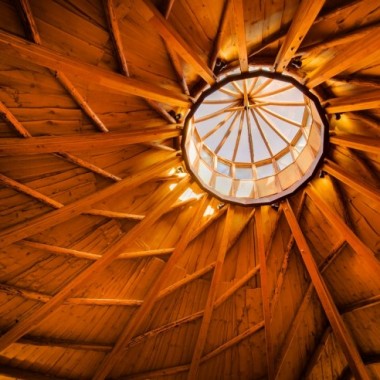 The Harbin Hot Springs Temple has a skylight as part of its intricate ceiling design. (Courtesy of SunRay Kelley) 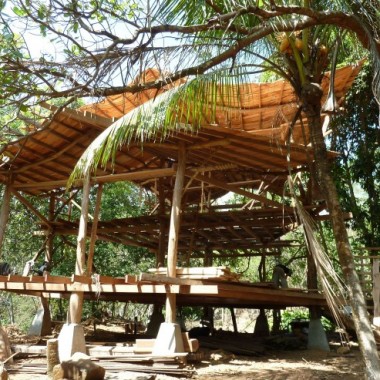 This 1,200 square-foot cob house is home to a family of five. (Courtesy of SunRay Kelley)

Building with wood and cob

For material, the self-described organic architect uses “anything I can get my hands on — stone, straw, metal. Obviously, wood has been my primary thing.” Most of the wood comes from Kelley’s own land.

Another favorite of Kelley’s is cob, a pliable mixture of sand, straw and earth that allows him to build in non-straight lines.

“That media’s really fun. When I discovered cob, I said, ‘Oh, this is what I’ve been looking for all my life!’ And yet a lot of people who work in this medium, they’re still trying to pull’em into this idea of square boxes. But the material’s not saying that at all,” he said.

‘Once you live in a round house, you never go back to a square house’

Kelley’s passion for circular designs reaches beyond a desire to build unique houses; it’s his attempt to shape the lives of the inhabitants. The idea, he says, is to build dwellings that foster connections with both Mother Nature and other people. 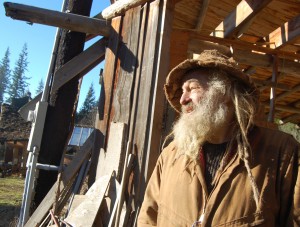 SunRay Kelley takes in the sunlight while working in his outdoor workshop.
(Martha Kang/KPLU)

“Nature, to me, is the great healer. Nature surrounds us all the time, yet if we’re isolated all the time, or we’re in a car, or we don’t spend time outside, we’re less connected from the rest of the whole of us. So that isolation that we’re feeling increases,” he said. “But if we go for a walk or we jump in the pond, all these things invigorate us, connect us and bring us joy.”

Then there’s the dynamic inside the home. In a round and open house, people don’t section off into their own corners, which helps them open up to each other, says Kelley. And the difference hits them at a deep, primordial level.

“We’re conditioned to accept shapes and forms that aren’t comfortable, which is not allowing the love that’s around us to flow back and forth naturally. And we accept that, because that’s all we know. But once you’re in a space that’s round instead of square, all of a sudden, the energy moves. It’s happy,” he said.

Kelley often hears from clients and tenants who’ve experienced the difference, and he says their words are proof he’s on the right track.

“It’s all about our choices, you know, but unless people know there are good choices, it’s hard to get’em awakened,” he said. “Once they find it, then they’re on board; there’s no going back. Once you live in a round house, you never go back to a square house.”