The slow-motion demolition of two hydroelectric dams on the Elwha River is radically changing the landscape near Port Angeles, but it’s not a scene you can witness on your own. Just a handful of dedicated photographers and filmmakers have been given permission to place their cameras at key posts near the Glines Canyon Dam to capture the changes as crews of skilled technicians carefully notch into the concrete walls and place dynamite in just the right places.

The demolition can only take place when endangered fish are not running up stream, and even getting up to the site during drilling work requires a special escort approved by the National Parks Service. The federal agency is carrying out the careful work of what is known as the largest dam removal project in the world, and it’s nearly done. Only a small stub of the century-old Glines Canyon Dam is now left on the Elwha, almost invisible under the water line. Its sibling downriver, the Elwha Dam, has already been removed.

On a recent icy day, I found crews at work, chipping away at the remaining piece of the Glines Canyon. Working from the top down, they had notched the upper dam down to just 15 to 20 feet.

“This dam, built in the ‘20s, is 210 feet high, and it’s a big dam to take down,” said Don LaFord of URS, the engineering firm overseeing the dams’ removal. “It’s a long way to the bottom. We’re getting there, slowly but surely.”

Footage of the demolition of the Glines Canyon Dam by John Gussman.

LaFord, who worked on the Kingdome implosion 14 years ago, says compared to the Elwha, removal of the Glines Canyon Dam has proven more difficult.

“The Elwha Dam was built in 1910. And it was only 110 feet high,” he said. “The concrete in there was of poor quality, so it broke out pretty easily. We actually just used hydraulic hammers to take that dam down.”

Seen from above, the crews’ equipment looks like tinker toys. (Courtesy of Rainey McKenna/Olympic National Park) 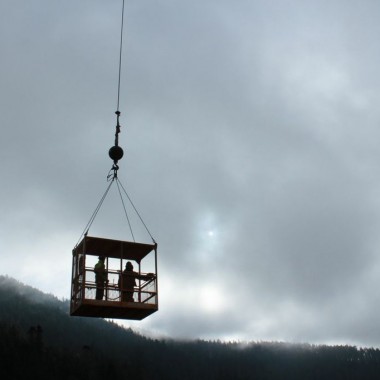 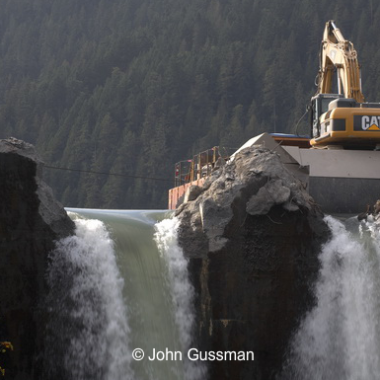 Crews chip away at the Glines Canyon Dam. (Courtesy of John Gussman) 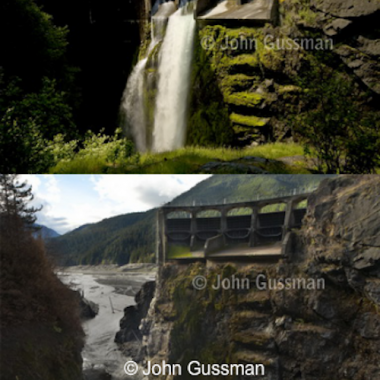 The two images show the evolving landscape of the Glines Canyon Dam. (Courtesy of John Gussman) 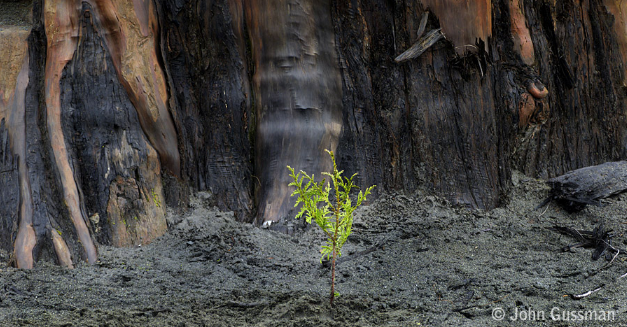 Vegetation is returning to the area. (Courtesy of John Gussman) 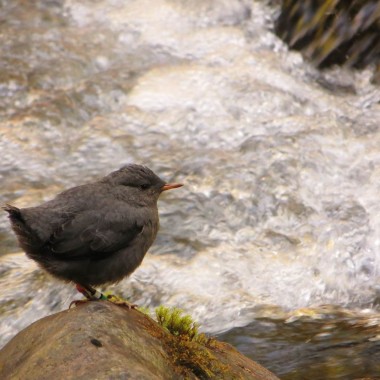 An American dipper is seen perched over the Elwha River. (Courtesy of Chris Tonra)

Even when the last stub of the Glines Canyon Dam is gone, the spillway will remain standing. Jutting out between the rock walls, it will show visitors where the dam once stood.

Hanging onto the railing, you can peer hundreds of feet into the gap where a floating barge and a drilling rig look like tinker toys on the edge of disaster. 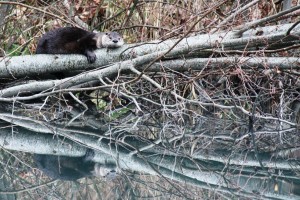 A river otter looks on as crews work nearby. (Courtesy of Kim Sager-Fradkin)

There’s a man cage on a cable that flies the demolition workers up and down through the sky. It’s work that could make you dizzy, but Aaron Jenkins, project superintendent with contractor Barnard Construction, assures me it’s safe; workers are always strapped in.

“This is a once-in-a-lifetime project in a national park, in a beautiful area,” he said. “And [we are] trying to do the best job that we can, keep everybody safe and bring the ecosystem back to where it should be.”

The hardest part, says Jenkins, is dealing with winter winds and other weather dynamics that require them to stop and start frequently. But the job does have its perks. Jenkins enjoys spotting wild gawkers like elk, deer and even a seven-point bull elk.

“A big bull elk used to stand up the hill there and watch us every day,” he said. “They’re curious little fellas.”

River otters stop by, too. Jenkins says they’re playful and appear to be watching the removal process, undeterred by noisy equipment.

“Oh, he’d swim around out there, when there used to be a lake, and come up to the barge and watch us, and hang out all day,” said Jenkins.

‘Over time, people began understanding each other’

Even in the icy winds, there’s a lot of laughter in this town these days, perhaps because so much nature once harnessed to produce electrical power is now coming back to life.

“It’s just such an amazing story of how our culture has changed,” said Barb Maynes, public information officer with Olympic National Park.

Maynes says it’s a wonderful time to live in Port Angeles. She’s been watching the dam removal process since its very difficult beginnings decades ago.

“It’s the largest dam removal,” said Maynes. “It definitely shows what can be done, not just the technique or science or engineering; it’s all of that.”

But what’s most impressive isn’t the scale of the project, says Maynes; this is a story about people “listening and working together, and being able to get past their initial reaction to an idea.”

Maynes says little about two ongoing lawsuits surrounding the dams’ removal. One deals with the effects of sediment on a municipal water treatment plant, and the other with the use of a new tribal hatchery to keep salmon running during the removal process. For many in Port Angeles who are hosting dam visitors from around the world, even the millions of dollars those suits may cost seem to have faded into the background.

“This began in so much conflict, disagreement and bad feelings. And over time, just through conversation — and I think this is a huge part of the meaning for PA [Port Angeles] — over time, people began understanding each other, to a point where even proponents of dam removal can celebrate and honor the role that the dams played,” Maynes said.

‘We’ve waited a hundred years for this’

People whose grandparents built the dams are once again enjoying walks on sandy beaches where, for decades, there were only cobbly rocks alongside a paper mill that has long gone quiet, says Maynes. 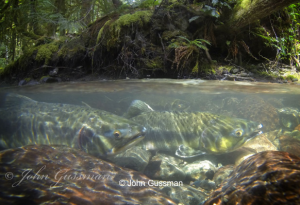 And if you squint, in the distance, you might see smoke rising from the smokehouse on the Lower Elwha Klallam Tribe’s reservation. With the dams now gone, salmon have returned in bountiful numbers. Last year, the tribe saw the largest Chinook run in decades.  The smokehouse is once again bustling, and the tribe’s children are learning to clean fish for the first time.

The removal of the dams has also uncovered pieces of the tribe’s history, including the tribe’s creation site just upstream of the Elwha Dam.

“The Elwha Valley has been the home of the Lower Elwha Kallam Tribe, since time immemorial,” said Rainey McKenna of Olympic National Park. “For them, that’s of great significance, because they now have renewed access to that site. So that’s great cultural significance.”

With the dams gone, the river valley is fast-evolving. Before long, the river will open up, says McKenna, and plants will grow.

Photographer and filmmaker John Gussman’s documentary on the Elwha River, “Return of the River,” will be released this spring. You can watch the trailer on the film’s website, elwhafilm.com.

The Burke Museum of Natural History and Culture is showcasing “Short Takes on Dam Science” at Seattle’s Neptune Theater Tuesday at 7 p.m. The museum’s exhibition, “Elwha: A River Reborn,” runs through March 9.