Seven maximum-security inmates sit in a room with their eyes closed, not making a sound.

Shackles bind their hands and feet, confining them to a metal chair bolted to the ground. A guard stands nearby. Yells and clanks from the hallway stray in through the open door.

This is what meditation class at the Monroe Correctional Complex looks like. The students, murderers and rapists among them, listen as volunteer teacher Cathy Iacobazzi walks them through a practice session.

But inner calm doesn’t come easily for most. After a session of 10 rounds of breaths, one inmate asks: “Does practice make it easier? Is it like riding a bicycle?” Another inmate says the lunch he ate prior to class is sitting heavy, stealing his focus.

“It’s a brutal kind of practice,” Iacobazzi tells them. “It takes a lot of work. But the results you get — being able to focus … what a benefit. And you get to choose to do that. It’s your choice. You get to do that. No one can stop you, no matter where you are.”

The students ask questions, express their doubt. But when she asks them to try again for another 10 breaths, they close their eyes and breathe. 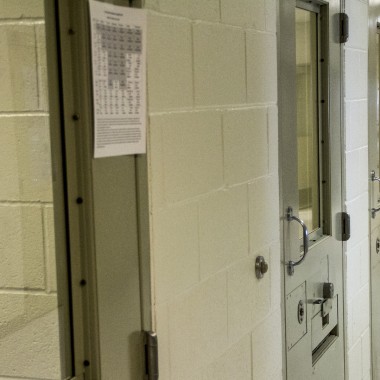 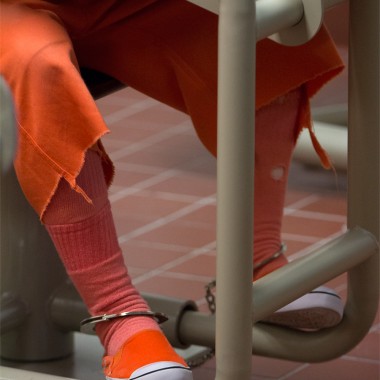 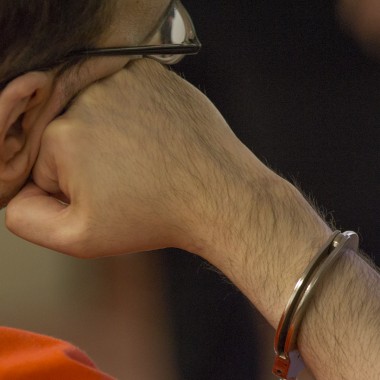 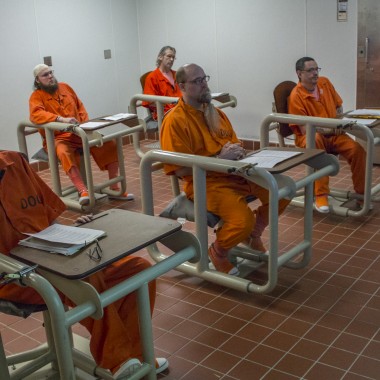 ‘When you’re alone in that cell, the mind tends to wander’

It may not be easy, but the inmates willingly attend the voluntary class. For one, it means another hour away from their small, barren cells where they spend 23 hours of most days, alone. But also enticing is the idea of a free mind.

“When you’re alone in that cell, the mind tends to wander to the future, and that’s where anxiety is. Or the mind wanders to the past, and there are regrets and depression,” says prison psychiatrist Ryan Quirk.

Meditation, says Quirk, helps inmates think in the present moment — “when decisions happen”— instead of dwelling on what was, or what could be.

“They have a better opportunity to act from a decision as opposed to just on impulse,” he says. 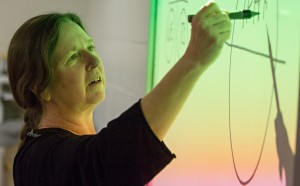 Cathy Iacobazzi walks inmates through a lesson about the human brain. (Justin Steyer/KPLU)

The meditation class is part of the prison’s Reintegration and Progression Program (RAPP), which includes aggression control training and lessons on healthy living. Some RAPP classes are recognized by the state as evidenced-based, meaning course attendance has shown a correlation to a lower recidivism rate. This particular class is offered in partnership with Yoga Behind Bars, a Seattle-based nonprofit that provides yoga and meditation classes to inmates with the help of volunteers like Iacobazzi.

Iacobazzi’s class, first offered last August and now in its second 10-week term, is not yet old enough to apply for evidence-based certification, which requires at least seven years of data on inmates after their release. Still, Monroe officials say the class has shown promise.

Six of the 13 inmates who completed Iacobazzi’s first meditation class have been released from the maximum-security unit to the prison’s general population, says program manager Mike Walker. Those six, he says, are the ones for whom “the light came on” during class.

It happens at a different time for each student, says Iacobazzi.

“I have had the experience, especially last time, of men who likely weren’t interested in what I was teaching become interested, and then really start to pay attention, really start to ask questions,” she says.

The class doesn’t aim to convert inmates into devout believers of the teachings of meditation; the idea, says Iacobazzi, is to gear them with coping tools.

“Right from the beginning, I say, ‘Don’t believe anything I’m telling you unless you can, inside your own consciousness, inside your own being, you can go, ‘A-ha! Oh, that makes sense,’” she says.

‘Some of these guys have never said ‘thank you’ before’ 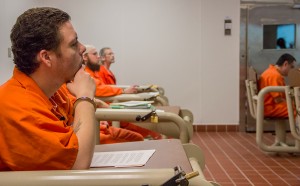 Then there are the more subtle lessons the inmates learn in class: in sum, how to socialize. To facilitate a classroom setting, the prison purchased eight special metal chairs that accommodate shackles and allow violent offenders to congregate. The chairs have proven effective at other prisons, including the Washington State Penitentiary.

“It allows for a therapeutic environment while at the same time maintaining the safety and the security of the unit,” says Quirk. “It’s often thought that you have to sacrifice one for the other, but this shows that there can be a balance.”

Sitting in the same room and attending class together teaches these inmates “social skills you and I learned growing up,” says Walker.

“A lot of these folks didn’t have that opportunity. Some of these guys have never said ‘thank you’ before, and that’s one of the social skills that they get to learn,” Walker says.

The classroom setting “makes’em feel more human, too,” says prison superintendent Margaret Gilbert. “You know, you’re not caged up; you’re like anybody else. You’re sitting there, having a conversation.”

The lessons help prepare maximum-security inmates for release back to the prison’s general population, or in some cases, directly to the outside world. They also give prison officials a chance to gauge how inmates might handle life in a less restrictive setting.

“[Before these programs], you didn’t really have an opportunity to see how they were going to interact with other people, and a lot of them would come back,” Gilbert says. “We [now] get to see how they do speaking up in class, interacting with each other and with the officers. That really does give us a good idea of, you know, is this offender going to make it, or do we need to extend the program a little bit longer?”

To encourage progress, Walker has devised a reward system of tokens inmates can earn through good behavior — “for not getting an infraction, for participating in class, for doing their practice work, for using their skills on the tier.”

On a typical day, an inmate can earn up to four tokens. On class days, the maximum jumps to six. Collect 50, and the inmate can cash in for a phone call, or, for 50 tokens each, have dinner with other inmates in the same room, albeit shackled to their chairs. Both are “big incentives,” especially those who can’t afford to call home, says Walker.

“It’s working so far,” says Walker of the system. “Some of these guys were getting citations every day, and multiple ones at that. And they’ve had nothing since August.

“Two guys that would not speak to each other four months ago are now having, for all intents and purposes, dinner together. It’s all part of the changes we’re seeing them go through. They’re learning how to be social.”

Asked just four weeks into the class, the inmates say the course has started to change them in palpable ways.

“What it’s helped me with a lot is a lot of anger issues, fear of the unknown and anxiety. And if I find myself getting angry at the staff or something, I go into meditation, bring it down,” says inmate Rick Danielson. “Isolation brings on a lot more stress than you’d have if you were outside.”

Most of Iacobazzi’s students have violent pasts, but she prefers not to know their history.

“They’re people,” she says. “They’re suffering. How do we lessen suffering is all I’m trying to get at.”

Her goal is to share with them what she herself has learned from 40 years of studying meditation.

“You can either throw up your hands at the state of the world and feel helpless, or you can do as much as you can to try to make sense of things,” she says, adding she hopes to impart on each inmate at least “one little trick” to help them cope.

“What a thrill it is to me to provide an idea to a person chained in a chair that they can have impact in their life and in their world,” she says. “I’m planting seeds. Even if they don’t fully blossom in the 10 weeks, you know, who knows how far down the road something is going to take root and start to grow?” 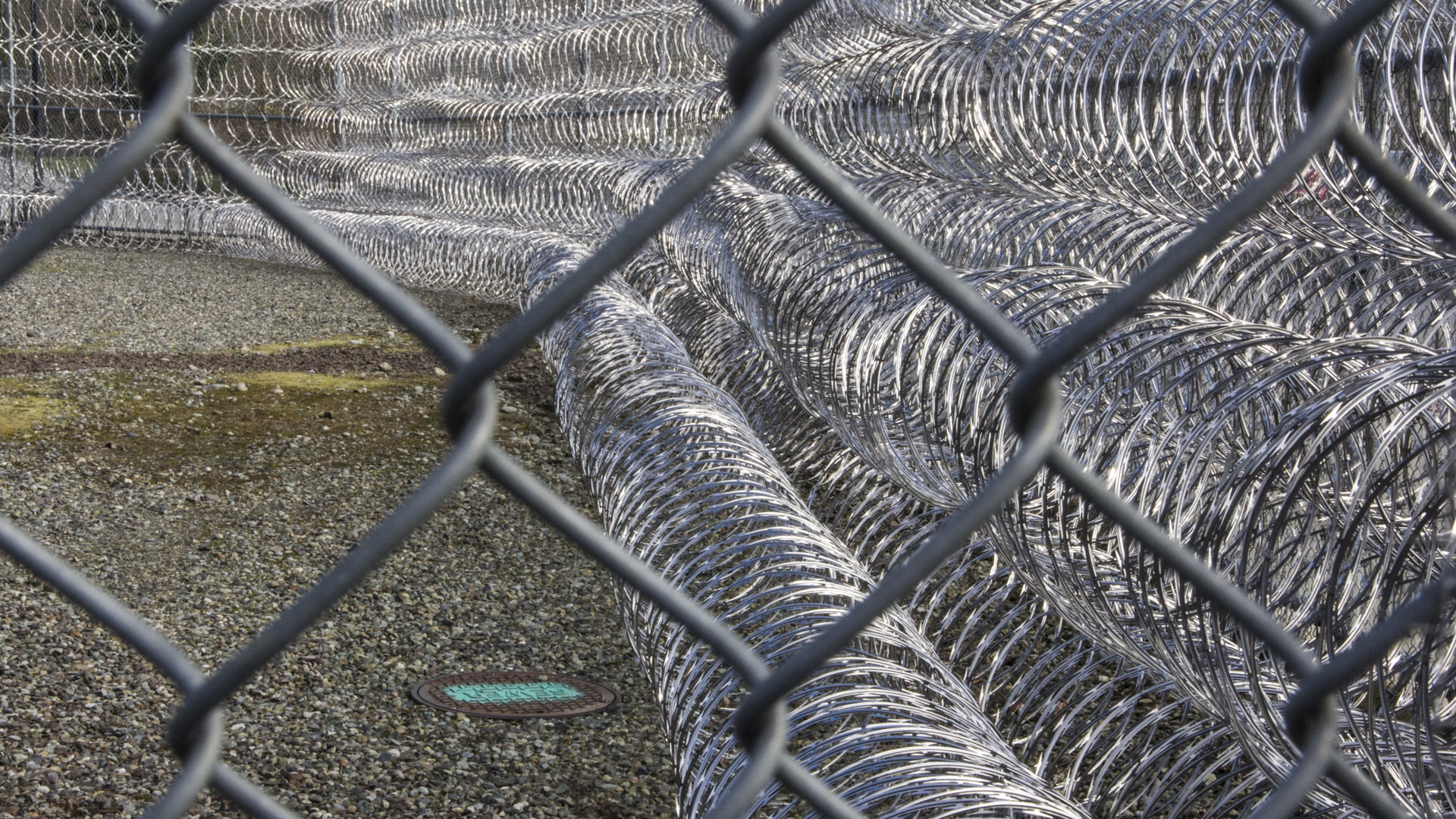