Bruce Stobie may be blind, but he’s getting ready to do something that most of us with perfect eyesight would never attempt. On June 10, he’s setting out on a three-week round-trip expedition to climb North America’s tallest peak, Denali.

Stobie grew up in Des Moines, Washington, loving to climb. But everything changed on Nov. 5, 1983. He was one of nine college kids packed into a truck driving through the Cascades when the driver lost control. The last thing Stobie ever saw was the truck flying into the air. He smashed, face-first, into the roll bar of the vehicle before being tossed out.

“When it happened, I thought I was going to die,” Stobie said. “[It] detached the retinas in both eyes, and the sight loss was pretty much instantaneous.”

Stobie lay in the hospital recovering, trying to come to terms with what it means to be a blind person. So he decided to set some goals: finish college, run a marathon and climb a mountain.

“[Climbing Mount] Rainier had been something I had always wanted to do, so I put these things in my bucket list to accomplish,” Stobie said.

‘There were all these obstacles’

But the first time Stobie went hiking after losing his eyesight was terrible.

“There were all these obstacles; [I was] stumbling over things, you know. I had the grieving process I was going through,” Stobie said. “I loved being in the mountains when I could see just to look at stuff, and I couldn’t do that. So it was just like, why would I want to do this? This is not fun.”

He gave up his climbing dreams for a long time. He got married, had children, worked for Boeing as an information-technology analyst.

But about nine years ago, he found himself ready to try again. He convinced a former Boeing coworker, Ron Fleck, who taught mountaineering classes in his spare time, to take him along. Fleck says he proposed a hike in a place where he usually takes beginners.

“He told me he had already been on that hike years ago when he could see, and that was a hike for wimps. So I thought, ‘OK, I’m going to have my hands full,’” Fleck said.

‘I think if I could see, I’d be wanting to move a lot faster’ 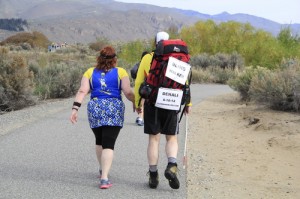 Stobie, needless to say, is no wimp. At age 51, he has run four marathons.

On a recent sunny day, Stobie met up at a trailhead near Issaquah with Fleck and another climbing buddy, Charlie Soncrant. Stobie had gotten up at 2:45 a.m., and had already worked out for two and a half hours. But that wasn’t enough; now he was ready to charge up this mountain. But he can’t do it alone.

Fleck and Soncrant are Stobie’s eyes when they’re on the trail. Fleck leads, and Stobie follows him, holding on to a rope attached to Fleck’s backpack in one hand and a cane in the other. Soncrant follows behind, making sure Stobie doesn’t go off the edge.

As the trio hiked, Fleck called out the terrain every few steps.

“The rocks are closer together, so you probably just want to take a lot more in the way of baby steps, OK, Bruce?” Fleck said.

Stobie says he has a good mental memory and can picture the views. But the joy he gets from this comes from the physical exertion and pushing himself.

“I like seeing how fast I can go,” Stobie said. “I think if I could see, I’d be wanting to move a lot faster.” 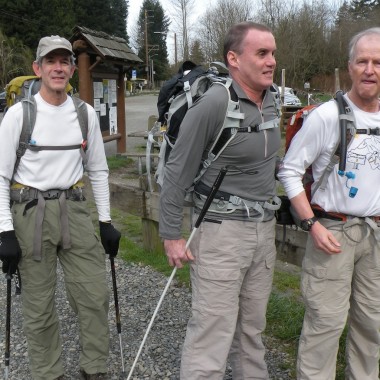 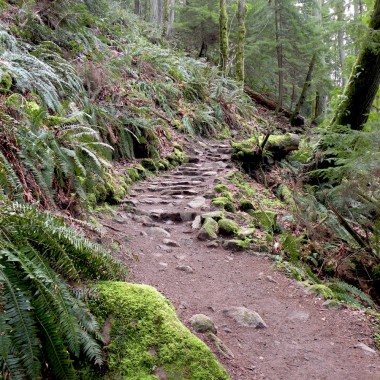 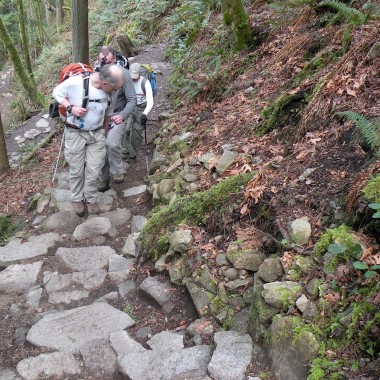 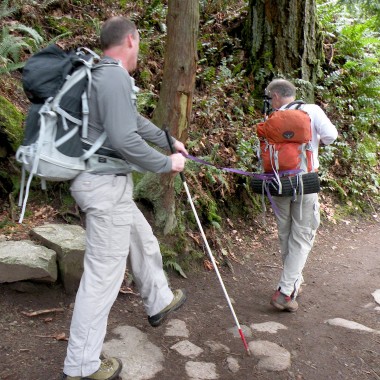 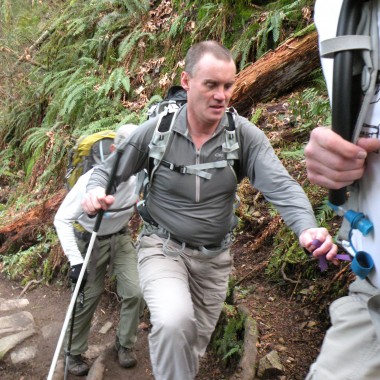 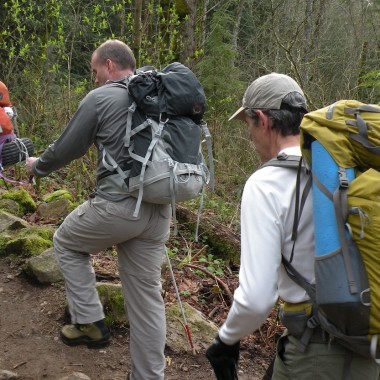 ‘He just gained this trust’

Still, it’s one thing to hike in the Issaquah Alps and another to navigate around crevasses and ice falls to get to the top of Mount Rainier when you can’t even see where you’re going. Five years ago, Stobie signed up to climb the mountain and showed up to an orientation session. His guide, Mike Haugen, was looking over his clients’ medical information when he saw the word “blind” on Stobie’s sheet.

“I kind of did a double-take at it, and thought maybe he’s got a really high prescription for his glasses or something like that,” Haugen said. “I went and talked to one of the owners, and they said, ‘Oh, we forgot to tell you, he’s blind-blind.’ I kind of went into panic mode. I had never guided a blind climber before.” 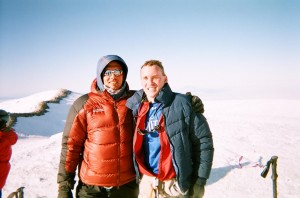 Mike Haugen, left, and Bruce Stobie pose at the top of Rainier in 2009. (Courtesy: Bruce Stobie)

But Stobie and Haugen agree that it was serendipitous that they were assigned to each other, because they work so well together.

“He just gained this trust, and I trusted him in terms of following my directions, and we got to the point where he would walk up to an edge of a crevasse and I would say, `Take a small right step and a big left step,’ and he would step right over the crevasse,” Haugen said. “It was pretty amazing.”

They made it to the top, and now they’re teaming up again, with one other guide, for an even more challenging task – climbing to the top of the 20,322-foot Alaskan peak, Denali. They’ll be carrying 70-pound packs, and pulling sleds loaded with gear and food for much of the way.

Stobie’s wife, Gwyn, is trying not to think about the dangers.

“I thought that climbing, for him, was like a fancy hike, and it wasn’t until I started seeing some of the pictures that I realized that this was serious stuff,” she said. “I’m more than a little nervous.”

There are a few other blind mountaineers who have gotten to the top of Denali, but the mountain can be deadly even for people with perfect eyesight.

One soft-footed step at a time

As Stobie and his friends headed down the trail on a recent day, they traveled a lot slower than hikers usually do. Falling while facing downhill is more dangerous. All the way down, Fleck advised Stobie where to put his feet.

“Alright, so we’re going to step off this root. It’s about a foot down. You might want to go left, sideways,” Fleck said.

It’s almost as if Stobie takes two steps for each one. He first probes with his foot to test whether the spot is solid, then, when he feels comfortable, takes an actual step.

“Yeah, it’s like, is this a safe one? No? Readjust. Yes? Go ahead and put your weight on it,” Stobie said.

That’s just one of the ways Stobie has to approach climbing differently than a seeing person would. And as he prepares for Denali, he’s sought advice from one of the only other blind people who’s ever climbed the mountain, Erik Weihenmayer.

“I’ve had both of my eyes removed, so these are prosthetic eyes,” Stobie said. “Erik has prosthetic eyes, too, so one of the questions I had was, ‘How did you deal with the cold?’”

Stobie was worried his eyelids might freeze to his prosthetic eyes. Now he knows to come prepared with goggles and saline solution. 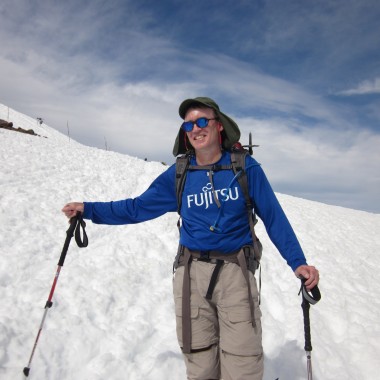 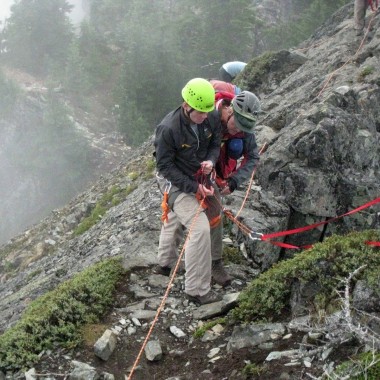 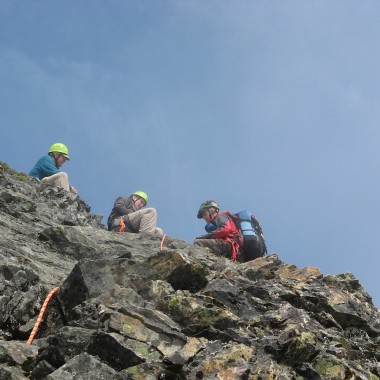 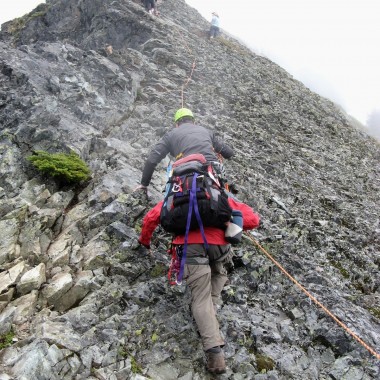 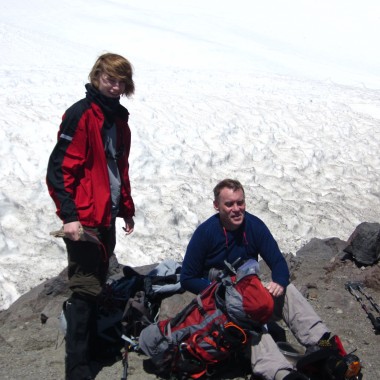 Bruce Stobie and his son, Duncan, are seen at Camp Muir on Mount Rainier in 2011. (Courtesy: Bruce Stobie) 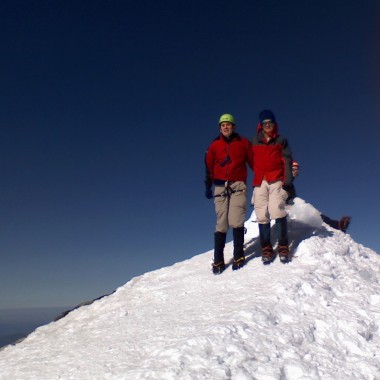 Stobie is still fundraising for his expedition, which will cost about $45,000. That’s more than it would cost if he could see, because he has to have two guides.

“There are points, you know, definitely, where I was like, ‘I wish I could see. This would be so easy,’” Stobie said. “It’s like, well, that might be true, it may not. But you know, this is who I am. This is what I have to deal with. It’s like, live with it.”

Stobie hopes that in a month and a half, he’ll stand at the top of Denali and feel and hear the wind and the calls of triumph from his climbing partners. Then he’ll come down, carefully, and most likely, set another goal to reach.