What many fans of her art don’t know is that McClure’s pieces aren’t drawings or woodblock prints. She carves them out of paper, using an X-Acto knife.

“[I start with a] black piece of paper, cutting away things and being left with an image behind that’s still the piece of paper, but now it’s all carved up, like lace, and has an image and a story in it,” McClure said.

From performing in front of crowds to cutting paper 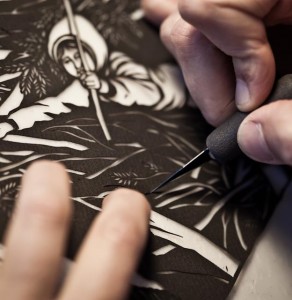 The technique was born out of necessity, says McClure. In the early 1990s, she was a recent graduate of the Evergreen State College at time when self-expression was the norm.

“The air was electrified,” she said. “Expressing yourself and your inner-turmoil by making up a new song every day was just kind of the way you did things around here.”

She got caught up in the riot grrrls music scene and performed solo “sung word” compositions, touring with bands like Kicking Giant and Bikini Kill. But she says it wasn’t sustainable.

“You know, I’d be in these bars, singing without a microphone. And that’s a very raw, emotionally-vulnerable state to be in with a bunch of drunk guys,” McClure said.

That’s when she started making her art.

“Starting to express myself more visually was a lot more safer place to be,” she said, adding the birds and the plants that appear in her work are all versions of herself. “And I could express these ideas and these thoughts, and these feelings I was having in a safe way – much safer than singing in front of a bar.”

Paper-cutting ended up being the perfect solution. It was an affordable way to create graphic images that she could reproduce in many sizes using a copy machine. She first used the technique to create a children’s book, titled “Apple,” then moved on to create her first calendar in 1998.

Scenes from an idyllic life

Nowadays, McClure finds safety and inspiration at her beachfront home, near Priest Point Park in Olympia. Daily walks with her family are part of the routine.

“The thing about a beach is it’s always changing in these subtle ways. Like there’s a winter beach, as opposed to the summer beach. It’s like a different character,” she said.

On a recent day, I found her young son and her husband digging up an old tire that got left in the sand. Nearby, a raft they built floated on the waves — the subject of an upcoming book. McClure says part of what she wants to do as she captures snippets of life here is to remind people to get out and enjoy nature.

“Or if they’re not able to do it, then they can be transported to a moment in their past when they were. And they can have that memory and recall it,” she said. 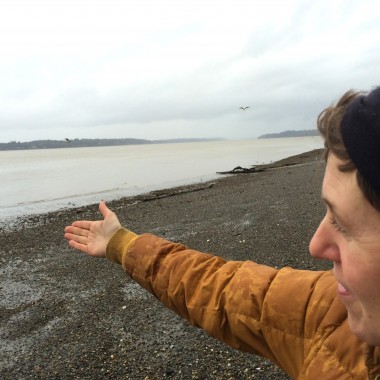 Nikki McClure gestures out at the view from the her beachfront home. (Bellamy Pailthorp/KPLU) 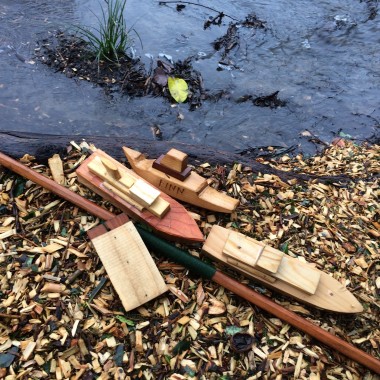 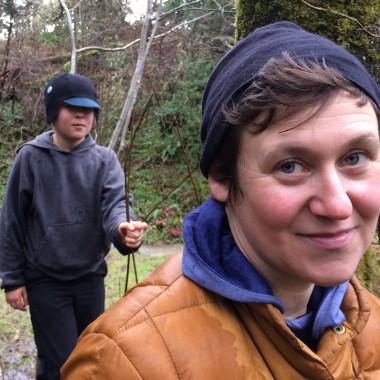 Nikki McClure smiles at the camera as her son, Finn, follows behind her. (Bellamy Pailthorp/KPLU)

Nikki McClure is seen with her son and her husband. (Bellamy Pailthorp/KPLU) 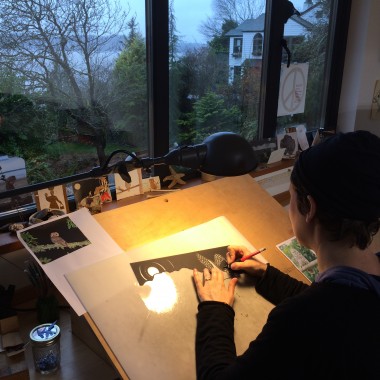 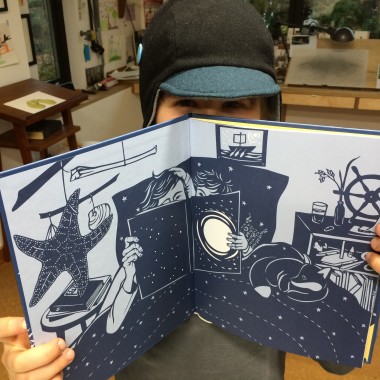 Nikki McClure’s son, Finn, shows off one of the artist’s books. (Bellamy Pailthorp/KPLU)

‘Be inspired and then act upon that throughout the day’

McClure’s calendars and posters are full of shorelines and woody outdoor scenes, gardens and the farmers market as well as wholesome vignettes of family life indoors. They include single words and phrases.

“Often the image comes first, and then I then think about words, but I try not to grab the first word that comes first,” McClure said, explaining her process. “So oftentimes, there’s a sort of Alice-in-Wonderland event where I kind of get lost in the dictionary and following word origins and also synonyms of the words, and [I end up] kind of traveling through the book that way.”

Some of McClure’s wording almost sounds like propaganda: “witness,” “take action,” “wake up.” The artist says she’s inspired by the Works Progress Administration campaigns of the 1930s and ‘40s.

McClure illustrates values like self-sustenance, working the land and conservation, and aims to effect positive change within communities. She says she encourages face-to-face communication, and wants to remind people that they have power to get together and make change.

“We’re humans, and humans do a lot of terrible things,” McClure said, adding she aims to emphasize our strengths, ”to reinforce those strengths and to fine-tune them so we’re ready for the work that needs to be done.”

But she purposely projects a softer tone.

“It has to be something people can put up in their kitchen. And it should just not be totally depressing, nor necessarily a call for immediate action or guilt-ridden moment,” she said. You’ve gotta get your coffee, be inspired and then act upon that throughout the day.” 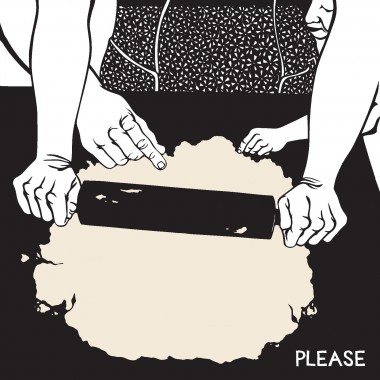 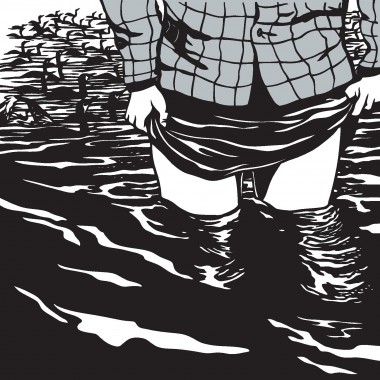 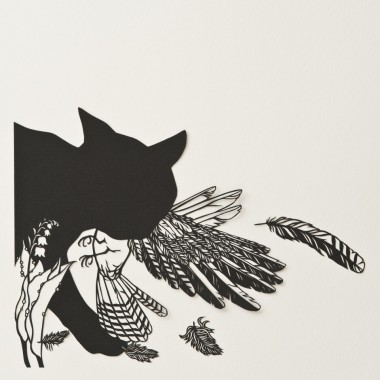 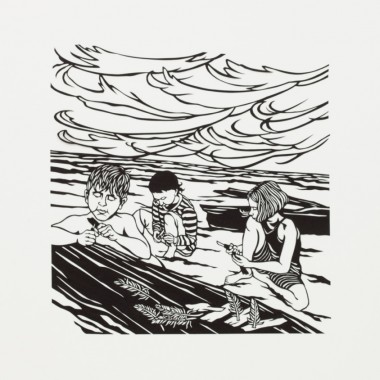 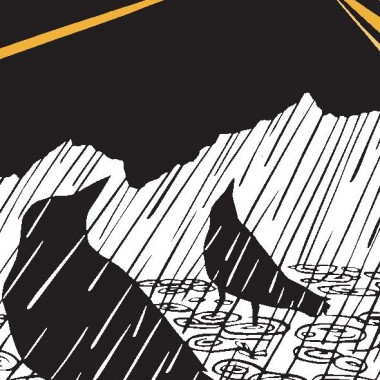 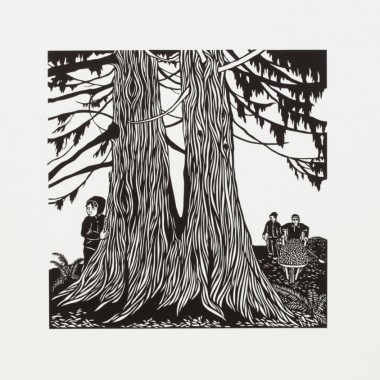 McClure thinks of her works as tiny sculptures. And when you see the originals, you know what she means. She doesn’t always glue everything flat, so you can see the texture of fine details, like a roll of plastic bags at an apple stand coming toward you in the frame. 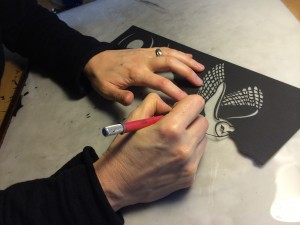 “Most people are aware of my work, and what their exposure to it has been is the graphic interpretation, which is a flattened version of it. But the original is very finely sculptural. And most people, when they see an original, still think of it as like a wood cut. Or flat. Like it really takes a close eye and a moment of pause to see that it’s a 3D object,” she said.

“I think the first time that I saw her work, it never occurred to me that it was paper-cutting,” said Nora Atkinson, who curated a solo show of McClure’s work at Bellevue Art Museum in 2012.

Atkinson, who is now with the Smithsonian Institution, says McClure’s pieces are intricate and mesmerizing, especially when you consider how carefully each composition is cut from a single piece of paper. And many of them are portraits of actual people.

“When you consider trying to portray someone with light and shadow in black and white with only positive and negative space, and the kind of images she’s able to capture in that — it’s really outstanding,” she said. “It’s the simplicity of the image and the clarity of her message that’s really the charm of her work.”

A retrospective of the artist

Looking at about 20 years of McClure’s collected works, from her first piece to her recent work, Atkinson says the artist’s growth in techniques and skills is evident. The retrospective is now showing in California at the Santa Cruz Museum of Art and History.

McClure says seeing the exhibition has been eye-opening for her as well.  She says, along with the t 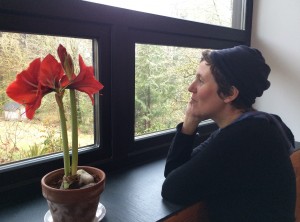 echnical aspect, because her work is so autobiographical, it also shows the story of a woman coming into her own, “where there’s this confidence and this growth.”

“And I become a mother, and [there’s] the learning and the love that grows from that. And in a way, it’s a story that you don’t really see much in museums, to see the story of a woman growing up,” she said.

McClure was recently included in a catalogue of contemporary masters of paper cutting. And with two new books just released, it’s a busy and successful time.

McClure, who says she never aimed for this kind of fame, seems surprised by it.

“You know, you’re just making pictures because you have to make the things that are inside you come out,” she said. “And it’s been kind of incredible that it’s been received so well and widely and that also feeds not just my soul but my family. It’s just kind of mind-boggling.”

And McClure is anything but complacent. She says she doesn’t want to squander the audience she’s built.

“What’s my retrospective going to be when I’m 60? That’s what I want to know. And it’d better be good,” she said.