Editor’s note: This piece is an update to our previous story on Bruce Stobie, which ran in May.

When Bruce Stobie arrived at Denali last month, he could feel the presence of the mountain, even if he couldn’t see it.

“I felt like a guest — not a welcome guest,” said the blind climber from Des Moines, Washington. “All there was: rock, ice and snow. And cold and warm temperatures. And that’s it. There’s nothing else.”

But 51-year-old Stobie was prepared for a difficult journey to the top. He’d been training hard for nine months in hopes of summiting North America’s tallest peak. He’d already summited Mount Rainier five years prior with the help of two guides. This time, he wanted to conquer the peak that towers more than 21,000 feet over Alaska.

And so he and two guides set out for what they expected to be a three-week climb to the top.

Bruce Stobie, left, is seen with a fellow climber. (Courtesy of Mark McCcracken.)

A strong start despite the scorching sun

“We started out strong. There was basically three days of hard climbing. The first day, we carry all the gear, basically for six miles, but it’s all flat. From that point on, the loads are broken up and you carry what you need to up the mountain,” Stobie said.

Stobie felt prepared. Even the wild swings in weather from day to night seemed manageable.

“When the sun came out, it came out hard and strong. And then on the other hand, the cold. We weren’t there for the worst of it. I believe it got down to minus 20 [degrees Fahrenheit], to minus 25, and that was chilling, to say the least,” Stobie said.

The crew aimed for alpine starts, setting out at 1, 2, 3 a.m. to gain ground before the sun grew too strong.

At night, a ‘total void of noises’

“I obviously did not see anything of the environment,” said Stobie. But it so happened it was his guide Josh’s first time on the mountain, too, and Josh’s observations helped fill in the blanks. “So I lived vicariously through Josh, because he was, in a way, gobsmacked.”

But one of the most memorable moments didn’t require Josh’s eyes or words: the “total void of noises” at night.

“I would just hang out at night and it would be totally quiet. No noise. Absolutely no noise,” he said. “I cannot experience that down here. Even in the wilderness down here, there’s noise.”

A change in course

The crew had no problem reaching base camp at 14,000 feet, the height of Mount Rainier. But when they switched from snowshoes to crampons, the terrain  — and the journey — took a turn.

“I was taking two steps instead of every one step, and I wasted a lot of energy,” he said. “Basically I was inefficient in my foot movement, and as the terrain got steeper, that inefficiency became more obvious.”

The crew reached 16,200 feet on the ropes during an especially difficult day that stretched 10 long hours. But it soon became clear their journey would end before the summit.

“I was breathing harder than I needed to. You know, with the higher altitudes, there was no room or tolerance for inefficiency,” Stobie said. “That night, I had an anxiety attack in the tent and had trouble breathing … Imagine being just maxed out on just breathing and not getting enough air.”

The following morning, Stobie went to see a doctor at base camp for a precautionary checkup. A clean bill of health left him with a heavy decision: Push on or turn back?

“I kind of struggled back and forth with it, but I think intuitively, I knew it was the right thing to do. I liked to visualize climbing and moving, and seeing the summit. And I was not seeing that happen, especially after that really long day. I knew what I was going into,” he said. “It was just not getting any better. And it was like, ‘OK, I’m done.’” 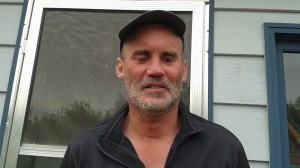 ‘Being on the mountain, it definitely exposed things’

Stobie and his guides decided to come down the mountain. It took eight hours to reverse the efforts of their two-week climb.

“Definitely, being on the mountain, it definitely exposed things, like this inefficiency in movement,” he said.” You know, had I been 10,000 feet lower, that would’ve been fun. I would’ve figured it out. There was just not any luxury of doing that [at high elevation].”

Now, three weeks later, Stobie still hasn’t fully processed his experience. He’s disappointed he didn’t summit, but he says he’s not done trying yet. And when he returns, he plans to be better prepared for tackling steep slopes with crampons.